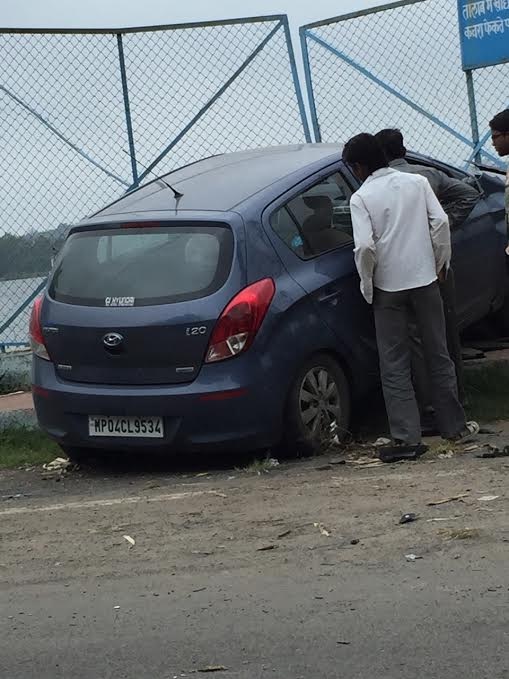 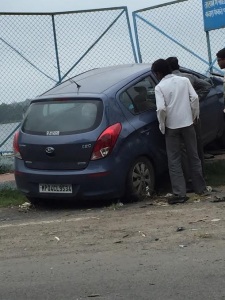 Bhopal: Police station round the corner. Yet, Bhopal rush hour madness gives a License to hit !

Amongst all the wonderful links doing the rounds in Whatsapp today, this piece of accidental rage catches utmost attention for the wrong reasons !
Screeching tyres, foot pressed on the accelerator, steering going haywire, swaying from left to right in no seconds, shamelessly overtaking from left side, sudden brakes bringing a vrooming automibile to a dead halt, be it an SUV or a Sedan or a Sporty 4-wheeler or any 2-wheeler or a daily-commuting hatchback – ain’t this the mess that surrounds us every bit of travel within the streets of Bhopal ?
The case in point is a Blue T 20 Sportz 1.4 Diesel Sedan, in a shade of T-Blue. Newsroom24x7 investigative team at Bhopal has revealed that this Car MP 04 CL 9534 belongs to Pawan Vishwakarma of Bhopal. However, it remains to be verified who steered the Drive’s bucket seat. The reckless driver hasn’t been identified yet.

So the I 20 gained momentum while passing by the Shahpura lake, overtook a biker easily, strategy being – hitting the bike bumper to bumper, then keeping pace with the recklessness, zoomed ahead and banged into the railing which has actually been provided as a safety fence along the sides of the lake,

Shahpura lake, divider passing all along, no front end traffic, Lane driving enabled. The road from Shahpura terminating at the Habibganj Police Station, all crossroads properly signaled, traffic signals laden with Cameras, mostly working all through the day. Always loud-speaking Traffic Police, constantly repeating the “Drive Safely” motto. Fully stashed with funds, the Police budget all in place, traffic establishments up and running. Whenever water logging occurs, water fills up in front of the Academy of Administration building and  barricade promptly gets laid in place so traffic gets diverted to avoid mishaps. There seems to be no issue of any commotion as things are so much in order (pun intended).

Thank heavens the I 20 hit another vehicle and created evidence. Because if you go to the police with a vehicle registration number, saying that this automobile was driving rashly and was almost going to hit you or someone else on the streets, the Traffic Police helplessly states – Did it ACTUALLY HIT any vehicle ? When you tell him it almost did, you are retorted with – What can be done for an event which has not happened ? We can register complaint ONLY when an accident or mishap HAS occurred. Try convincing him about the urgency of the matter with stuff like – such drivers should be warned or booked, and then, dear Ladies and Gentlemen, be our guest to the indifference in Traffic Man’s attitude and a wry look staring at you, silently shouting – hey we are not interested in your vigilante services. Cool off Commuter !

“Right to Right” says the rule book. But who cares in Bhopal particularly, India generally – when did anyone learn all the rules of driving for a Learner’s License or a Permanent License ? Its not a cool thing to know !
Right to Right ? Oh ! Hell ! If we are driving on the main lane, we are the king ! To hell with vehicles coming on crossroads. If we are moving out of a by-lane, and getting connected into the main lane, then again we are the king ! Who believes in Right to Right ?
Tell a reckless driver about Right to Right – try convincing them that if a vehicle from a by-lane is moving into the main lane, one must follow the Stop-Look-Drive routine, and remember that the first priority rests with the vehicle on your right. That is, you have to let the vehicle on your right side main lane or by-lane to pass ahead first, then comes your turn ! Even while taking your vehicle out from a valet parking (read Malls), can anyone please remember the “Right to Right” ? Niyat Niyat. Never.

Besides this, who will teach road manners to the bigwig Beaconists of the city ? No, we are not talking about the essentials – Of course beacons and sirens atop Ambulances and for Police vehicles-chasing-targets is fully respectable and understandable. Not that. Its these vulgar looking sirens and beacons atop ‘OTHER” vehicles which gives a puking hatred towards the in-passengers. The so-called VIP culturism in place, Ministers and influential cityheads flaunting it atop their vehicles is a strict No-no. Its an unwanted SDP – a Shameless Display of Power at the wrong place !

Haven’t we heard elders and youngsters in the homes arguing about Top Speed ? Father prefers to keep it at 40 kmph and the Dude wants to fly at a minimum of 60 kmph ! Interesting when a Dude asks a Pop- Hey Dad, if the top speed that you want me to keep within city limits is just 40 kmph, what’s the use of a fifth gear and when do I get to peak the milometer to a 110 in the city limits ?
Has been ages seeing folks maintain a 40 kmph speed limit wherever mentioned. Who ever does it, gets the ugliest comments and gazes and is reprimanded with overtakes from the left non-stop !
Does the Traffic system take cognizance of ever increasing speedometers and endlesly messed up driving situations on the road ? The thrill of driving fast lane within the city limits gives an adrenalin rush to the speedy commuter and spoils the rush hour driving comfort of the routine safe-driving commuter. What has Traffic police or their systems and procedures got to do with it anyway ? Road is a public property. Tax payers can use it wisely or arrogantly. Each to his or her own. Go on. No one is bothered. Not even the ones who are paid to. It is a free-for-all journey every day, 24 x 7.