The musical chair of Bihar politics 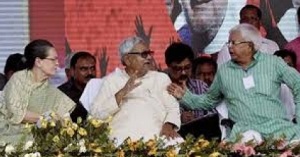 Patna, Bihar: It all began with a simple vote. A vote cast by a citizen of Bihar (erstwhile Bihar plus Jharkhand) started the Musical Chair of electoral politics. Congress got its chance to sit on the seat. Then RJD came in, ousted Congress and did a long ruling stint. The music was played once again. This time, BJP and JD(U) walked arms entwined and occupied the electoral victory centerstage in the game of Bihar’s electoral musical chair, and succeeded in expelling RJD big time. All this, as we know already, is history.

The ‘musical chair’ game of electoral politics in Bihar is out for bidding once again.  And, this time, the equations have altered altogether. We also have a new entrant, former CM Mahadalit Neta Jitanram Manjhi (Hindustan Awam Morcha), who has his own share of electoral stint and anti-incumbent issues. We have an NDA (with BJP, LJP, RLSP, HAM(S)) playing a big role in Bihar politics. Then we have  the Grand alliance of JD(U) plus RJD plus Congress plus Samajwadi Party.

BJP did Modi Rally in August, wherein Prime Minister Narendra Modi criticized the ruling JD(U) from start till date, the grand alliance of RJD, JD(U), Congress, the DNA et al. He also announced a 1.25 Lakh Crore package for development in Bihar recently in another event.

The Grand alliance did a Swabhimaan Rally on Sunday and spitted venom against ruling Central government. Swabhimaan, meaning pride, formed the central theme of this rally, and was delivered in words as well as body language.

Congress leader Sonia Gandhi said that Modi, a show-baazi PM, has slashed allocations to MGNREGA, runs an anti-farmer government, has not provided employment, and has failed to address Pakistan issue. CM Nitish Kumar took PM Modi head on and blamed him of cheating Bihar people in Lok Sabha polls and called him arrogant, listed his own JD(U) government’s achievements and promised of well-laid plans ahead. RJD leader Lalu Prasad Yadav played the religion divide M-Y stroke and criticized BJP of playing a Hindu-Muslim rift game.

On a latest, BJP President Amit Shah will hold an NDA meet today wherein it is being speculated that seat sharing among allies of NDA will be discussed.

This is just the beginning of electoral war of words. The tempo will keep on rising as election in Bihar approaches in the coming date of events.