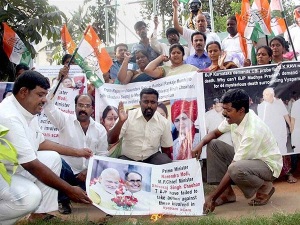 Bhubaneshwar : A retired Indian Forest Service (IFS) officer, who also acted as an observer in two Vyapam recruitment tests of Madhya Pradesh, was found dead on a railway track in Odisha. Police recovered Retd IFS Vijay Bahadur’s body from a railway track near Belpahar station under South-Eastern railways’ Jharsuguda junction this week. The retd officer was travelling to Bhopal in Madhya Pradesh from Puri in Odisha with his wife Nita Singh by the Puri-Jodhpur Express.

Superintendent Railway Police (Rourkela) Karam Sey Kawar informed media that, prima facie it appeared that, Bahadur accidentally fell off the running train and died. The official, however, said the actual cause of death would be ascertained after the post mortem report was available with the Government Railway Police.

‘We are investigating into the matter even though no FIR was filed by the family members at our police station,’ said Kawar. He further went on to add that the family has already taken the body after the autopsy. The wife of the deceased, Nita Singh, who was co-travelling with him, realized after some travel distance, that her husband had not returned to his seat and had been gone for quite siome time. Suspecting some fear over his disappearance, Ms. Singh rushed to the railway authority in the compartment and tried to converse. She reported about her husband going missing to the ticket checker (TTE) of the train after reaching Raigarh station, about 70 km from Jharsuguda district.

Bahadur’s death is the first incident after the Supreme Court in July handed over the probe to the Central Bureau of Investigation, which is inquiring into the Vyavsayik Pariksha Mandal (Vyapam), or the Madhya Pradesh Professional Examination Board (MPPEB) scam and cases related to the mysterious deaths of over 40 accused or witnesses. The CBI has so far registered over 80 first information reports and launched over 10 preliminary inquiries into the Vyapam scam.