The Government of Iraq is taking steps to match actions with words to demonstrate that Iraq is open for business, creating meaningful improvements to Iraq’s business environment and attracting much-needed investment for reconstruction projects across Iraq. The US Secretary of State Rex W. Tillerson in Kuwait City, Kuwait

Kuwait City, Kuwait: The US Secretary of State Rex W. Tillerson said here today that with the support of the United States and the Global Coalition to Defeat ISIS, Iraq has bravely fought and successfully liberated its territory from ISIS and four and a half million Iraqis have been freed from tyranny.

Tillerson was addressing the Iraqi Reconstruction Conference Session on Private Sector Engagement here on Tuesday (13 February, 2018). He said that over 3.2 million internally displaced Iraqis are now at home or on their way back home. And the Iraqi Government is reasserting control of the Iraq-Syria border. As we celebrate these victories over extremism and hatred, we know they were hard-won, and they came at a very high price. Much work remains to rebuild Iraq and modernize its economy. Helping Iraq create a government that is inclusive, accountable and transparent will build a society that can counter the extremist ideologies. This will deal ISIS its final blow and demonstrate its failed, violent ideology.

Washington DC: “Norway has been ever so supportive of the US efforts to defeat terrorism, the defeat of ISIS, and have also been very supportive of efforts to send the right messages to North Korea.”

This was stated by the US Secretary of State Rex W Tillerson as he welcomed the Norwegian Foreign Minister Ine Marie Eriksen Soreide to the US State Department in Washington DC on Thursday morning.

The two,Tillerson and Soreide, had important exchanges on a number of issues important to both countries in NATO. While appreciating the role of the Europe theater itself, Tillerson said that Norway has been ever so supportive of our efforts to defeat terrorism, the defeat of ISIS. Norway has also sent the right messages to North Korea, he pointed out. 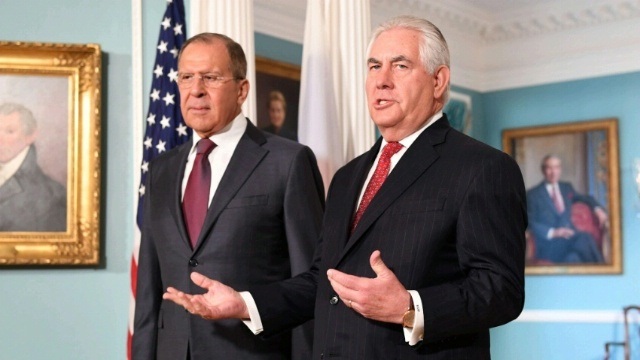 Washington, DC: US Secretary of State Rex W. Tillerson Tillerson met Russian Foreign Minister Sergey Lavrov, here on 10 May and discussed the importance of defeating ISIS, de-escalating the violence in Syria, and ensuring that humanitarian assistance reaches hundreds of thousands of civilians throughout the country.

The discussions between the US Secretary and Russian Foreign Minister covering a range of issues including Ukraine, Syria, and bilateral concerns lasted more than an hour.

During this meeting, both the US Secretary and Russian Foreign Minister restated support for the UN-led political process in Geneva, which is central to international efforts to bring about an enduring resolution to the conflict.

On Ukraine, Tillerson stressed the need for progress toward full implementation of the Minsk agreements. It was underscored by the US that sanctions on Russia will remain in place until Moscow reverses the actions that triggered them.

The United States and Russia agreed to continue discussions to resolve other issues of bilateral concern, including strategic stability.