New York City: India has blasted Imran Khan exercising the right of reply to the Pakistani Prime Minister’s statement in the general debate during the 74th session of the UN General Assembly on Friday, 27 September 2019.

India has described every word spoken by Imran Khan in the august Assembly as “callous portrayal of the world in binary terms” and dubbed what he spoke as “hate speech”. 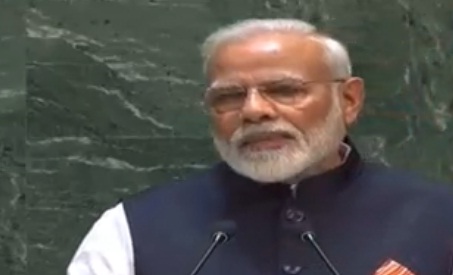 New York City: Prime Minister of India Narendra Modia ddressing the UN general Assembly here on Friday, 27 September 2019, on behalf of 1.3 billion Indians, said that in the world’s largest democracy, the highest ever number of votes brought the Government into power for a second term in 2019 with an even stronger mandate.

The message that this mandate conveys has a wide and inspiring significance. When a developing country successfully implements the world’s biggest sanitation campaign with the Clean India Mission — building more than 110 million toilets in just five years — all its achievements are an inspiration to the world. When a developing country successfully runs the world’s biggest health assurance scheme, giving 500 million people 500,000 rupees annually for free treatment, the gains from that scheme show the world a new path.

And when a developing country launches for its citizens the world’s largest digital identification program — giving them a biometric identity and saving more than $20 billion by checking corruption — the modern systems that result from this project give the world new hope. By 2022, when India celebrates its seventy‑fifth Independence Day, it plans to build 20 million houses for the poor, he said. It will also work to eradicate tuberculosis by 2025. Such rapid changes are taking place in India because India is a great culture that is thousands of years old, one with its own vibrant traditions and which encompasses universal dreams. The core of India’s approach is public welfare through public participation.

Viewed from a historic and per capita emission perspective, India’s contribution to global warming is very low, he said. Yet, the country is a leader in addressing this issue. Among the effects of global warming is the increasing number and severity of natural disasters. As such, India has initiated a “Coalition for Disaster Resilient Infrastructure” to build infrastructure that withstands natural disasters. India has given the world Buddha’s message of peace, not war. Its voice against terrorism rings with seriousness and outrage, alerting the world about this evil. Terrorism is one of the biggest threats to the world and all humanity. “It is absolutely imperative that the world unites against terrorism,” he said. With technology bringing about sweeping change to social, personal and economic life, as well as to security and international relations, “a fragmented world is in the interests of no one. We do not have the option to confine ourselves within our boundaries,” he said. “We must give new direction to multilateralism and the United Nations.” 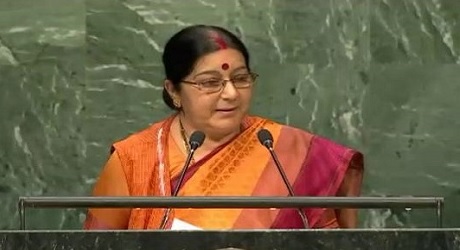 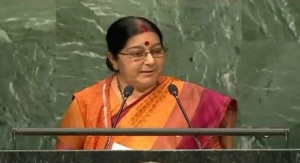 New York: Blunting the Prime Minister of Pakistan Nawaz Sharif’s tirade against India at the UN General Assembly last week, India’s Minister for External Affairs Sushma Swaraj today said at the UNGA that nations where UN designated terrorists roam freely, lead processions and deliver their poisonous sermons of hate with impunity, are as culpable as the very terrorists they harbour. Such countries should have no place in the comity of nations.

Ms. Swaraj was speaking during the general debate of the 71st United Nations General Assembly. She said: “The Prime Minister of Pakistan used this podium to make baseless allegations about human rights violations in my country. I can only say that those accusing others of human rights violations would do well to introspect and see what egregious abuses they are perpetrating in their own country, including in Balochistan.” The brutality against the Baloch people represents the worst form of State oppression, she said adding those who live in glass houses should not throw stones at others.

What did we get in return? Pathankot, Bahadur Ali, and Uri, said Swaraj. Pinning down Pakistan on the issue of terrorism, the Indian Foreign Minister said, Bahadur Ali is a terrorist in our custody, whose confession is a living proof of Pakistan’s complicity in cross-border terror. But when confronted with such evidence, Pakistan remains in denial. It persists in the belief that such attacks will enable it to obtain the territory it covets. My firm advice to Pakistan is: abandon this dream. Let me state unequivocally that Jammu and Kashmir is an integral part of India and will always remain so.

“History proves that those who seed extremist ideologies, reap a bitter harvest. The germ of evil has grown into a hydra-headed monster, backed by technological sophistication that threatens the peace and harmony of our world. We will not be able to win against terrorism by making specious distinctions between your problems and mine, between terrorists who attack you and those who attack me. For we do not know who this Frankenstein’s monster will devour next, Swaraj went on to observe.

The Indian Minisetr was firm in stating “we want to defeat terrorism, there is only one way – that we unite across our differences, add steel to our resolve and inject urgency in our response. We need to forget our prejudices and join hands together to script an effective strategy against terror. This is not an impossible task provided we have the will. We can do it, we must do it. Otherwise our future generations will forever hold us to account. And if any nation refuses to join this global strategy, then we must isolate it.”

In our midst, Swaraj said, there are nations that still speak the language of terrorism, that nurture it, peddle it, and export it. To shelter terrorists has become their calling card. We must identify these nations and hold them to account. These nations, in which UN designated terrorists roam freely, lead processions and deliver their poisonous sermons of hate with impunity, are as culpable as the very terrorists they harbour. Such countries should have no place in the comity of nations.

Reflecting on the scourge of terrorism, Ms. Swaraj told the UN Assembly that the current month of September marked the 15th Anniversary of the 9/11 terror attacks on this city (New York). Tragically, less than 15 days ago, she said, another attempt at killing innocents was made through an act of terror in this same city. She further said: “We, who have suffered in Uri recently, understand the pain inflicted by the same forces. The world has been battling this scourge for long. However, despite the blood and tears of innocent victims, attacks this year alone in Kabul and Dhaka, Istanbul and Mogadishu, Brussels and Bangkok, Paris, Pathankot and Uri as well as daily barbaric tragedies in Syria and Iraq, remind us that these malevolent forces are yet to be defeated.”

Emphasising that terrorism is undoubtedly the biggest violation of human rights, Ms. Swaraj pointed out that it targets the innocent and kills indiscriminately and said terrorism has gone way beyond affecting individuals or nations – it is a crime against humanity itself. But it is important to ask – who is behind this and who benefits from it? Terrorists do not own banks or weapons factories, so let us ask the real question: who finances these terrorists, who arms them and provides sanctuaries? We heard similar questions being asked by Afghanistan from this podium. 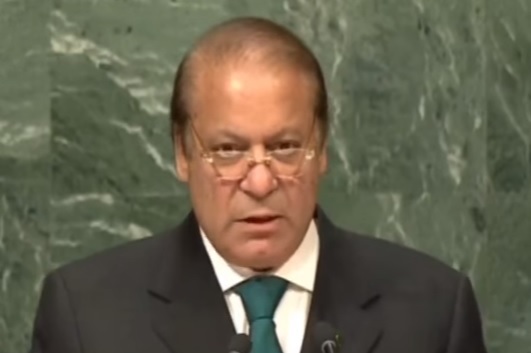 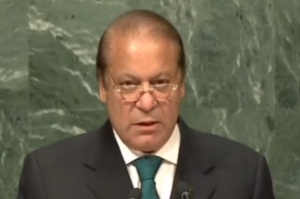 The Pakistani Prime Minister was addressing the United Nations General Assembly here on 21 September. Devoting most of his speech to Kashmir, Sharif said Pakistan “fully supports the demand of the Kashmiri people for self-determination.” He also demanded a U.N. fact-finding mission to Kashmir to punish the perpetrators of atrocities.

India has reacted sharply to Sharif’s speech. Spokesperson of Indian Ministry of External Affairs Vikas Swarup tweeted: PM Sharif at #UNGA says India poses unacceptable conditions to dialogue. India’s only condition is an end to terrorism. This not acceptable?