Ujjain: Home Guard personnel saved 3 devotees from drowning when they were taking the holy dip at Ramghat on the Kshipra river during the Simhasth on Saturday.

The devotees were joined their families after they were administered first aid during Simhastha at Ujjain on May 14.

Bhopal resident Rahul Dube was taking the holy dip at Ramghat when slipped and started drowning. As he was drowing, two civil defence volunteers of the Home Guards Anurag Verma and Dharmendra Choudhary dived into the river and saved him.

In a similar incident at Ramghat, Ujjain resident Navneet started drowning when he entered the deep area. Home Guard Hemraj Paraste and Civil Defence volunteer Jitendra Verma who were present there saved him from drowning. A resident from Sehore Rajkumar also went through the same ordeal. He was saved from drowning by Home Guard personnel under the supervision of Platoom Commander Puja Gaud. 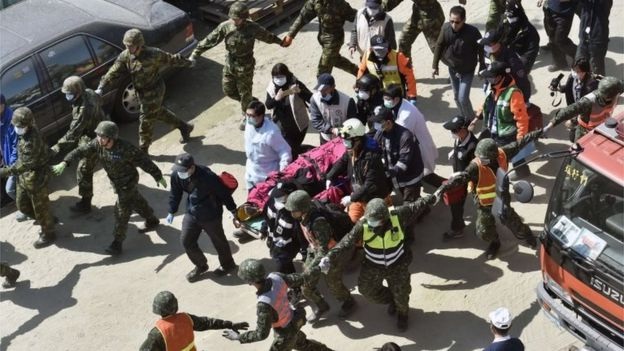 Taiwan : A man and a woman, injured during the earthquake which rocked a building and brought the cement structure down, have been rescued. Authorities informed that two people have been pulled alive from the ruins of an apartment building two days after it collapsed in a powerful earthquake in Tainan City in Taiwan. The woman was found alive, waiting silently for a rescue magic, as she stood still beside her dead companion, who has succumbed to the quake injuries. Having lost her two-year old son too, the woman stayed put and did not loose out on hopes of rescue, and continued breathing. The rescued woman, Tsao Wei-ling, was pulled out today morning in a conscious state, but was rushed to medical facility for hospital care.

From the nearby rubble, another person, a man — who was stuck alive, between the fallen concrete, was also rescued. Both survivors were pulled out by rescue workers after struggle and search inside the quake remains. Around 35 people died in the magnitude 6.4 quake, most of whom were inside the Weiguan Jinlong building. A densely inhabited building, authorities are suspecting of more than 100 people to be still stuck and trapped inside, waiting to be rescued.

The man had been communicating to rescuers throughout the night, while they were trying to judge the path of his rescue. Working for a long time in between the rubbles, the rescue workers finally managed to pull him out just before midday local time. Officials said that almost 310 people had been rescued from the rubble of the building, with 100 of them taken to hospital.

The 17 storeys of the Weiguan Jinlong (Golden Dragon) apartment complex crumpled as the quake struck just before 04:00 local time on Saturday (20:00 GMT Friday), as Taiwan was beginning the lunar new year holiday. 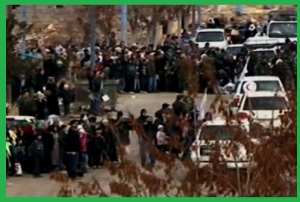 Madaya : According to UN humanitarian Chief Stephen O’Brien, there are around 400 residents in the Syrian town of Madaya who are waiting tirelessly for an urgent evacuation as the are in dire need of medical assistance and delays could mount into fatality.

The Chief briefed the UN Security Council on the crisis in the rebel-held town near Damascus, and reported that these 400 people need immediate attention, help and rescue from the town of Madaya, and need to be airlifted out of the Syria region, to be moved into attentive medical rehab. He warned that if steps would not be taken soon, and if help could not be extended pronto, these 400 persons could die for want of medical aids, as their condition is terrible.

Earlier, an aid convoy brought food to 40,000 town residents who have been under government siege for six months. Food and basic shelter aids have been reaching to there residents, yet, some criticalities are staying unattended. The UN clarified that it had been receiving credible reports of people dying of starvation.

The situation in Foah and Kefraya is also said to be extremely dire, with an estimated 20,000 people trapped there since March. Aid trucks are reaching the regions, but do find it difficult to cut across road blocks, resulting in loss of lives while waiting for relief.

Shenzen : Firefighters used torches to search for survivors among the rubble after a landslide gripped 33 buildings and brought them down to rubble, in the south city of Shenzen in China. The buildings were either buried or damaged to severe magnitude of destruction, and local media informed that the landslide had spread around an area of 380,000 sq m (455,000 square yards). Hundreds of rescue workers still toil in the damaged area and are trying their best to bring out survivors and the ones trapped and severely injured due to the natural catastrophe that engulfed the vibrant industrial zone of southern China. Rescue operations are on in full swing and rescue workers are looking for survivors ever since the landslide hit almost three dozen buildings in the southern Chinese city of Shenzhen.

Seven people were pulled out from the rubble with minor injuries but 91 people are still reported missing, according to Shenzhen authorities. Sunday had witnessed massive evacuations as about 900 people were evacuated from the industrial park as the landslide struck yesterday. Shenzen is one of China’s biggest and major industrial centre geographically located in the southern province of Guangdong, across the mainland border from Hong Kong. The hustle-bustle of activity went to a standstill as a major landslide blanketed a vast area of 380,000 sq m (455,000 sq yards) covering it with up to 10m (32ft) of mud. The landslide resulted in an explosion at a natural gas pipeline in the affected area. Workers working across the time zone have successfully managed to clean up about 400m of damaged pipeline and are presently working with full efforts on repairing and restoring the gas pipeline to as much functional level as possible.

Initial investigations by authorized agencies in China revealed that the landslide took place when a huge mound of soil and construction waste became unstable and collapsed. As a result, the mound had accumulated at a stone quarry that had been converted into a dumping area with its entrance and exit facing an industrial district. This was confirmed by local residents, who, while evacuating from the surrounding area, heard loud roars when the landslide had happened.

Rescue operations are in greatest magnitude and search for the missing 91 persons is on at high speed.