Newsroom24x7 Network Islamabad: Pakistan Prime Minister Nawaz Sharif today stepped down after the Supreme Court of Pakistan unanimously voted for disqualifying him from holding office and referred his case to […]

When India is fighting Pakistan-sponsored terrorism, the US talks of contentious issues between India and Pakistan

Lalit Shastri One security personnel was martyred and eight of them were injured, when terrorists attacked a security force convoy at Zakoora in the outskirts of Srinagar this evening (14 […]

Newsroom24x7 Desk Islamabad : Intelligence officials today revealed that Pakistani authorities have carried out raids at different places following attack on the Pathankot air base in India, leading to some […] 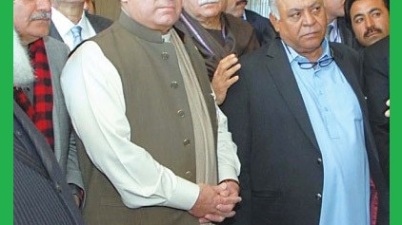 Newsroom24x7 Desk Islamabad : Prime Minister Nawaz Sharif has described his Indian counterpart Narendra Modi’s last week’s visit to Lahore as a good will gesture and called for the two […]

Newsroom24x7 Desk Islamabad : External Affairs Minister Sushma Swaraj expressed trust and assured cohesive dealings going forward with countries in the likes of Pakistan and Afghanistan during her tour to […]

US Prez refrains from mentioning India publicly, in Obama-Sharif meet

Newsroom24x7 Desk Washington D.C: Contrary to the presumptions based on nuclear ambitions of Pakistan and its intent on setting up an agenda of India-talks with the US President, the topic […]