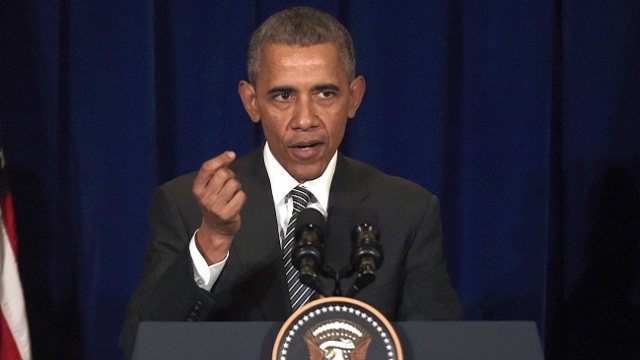 Maryland, Baltimore  : ‘It is a time of concern and fear for Muslims across US,’ said US President Barack Hussein Obama today during his first visit to a mosque inside the US. Making a direct reference to the recent political rhetorics against Muslims in the country, Obama attended upon the majority chritian dominated population and said that Americans cannot take it sitting down when attack on their faith is made.

Obama made a historic address to Muslim community as he made a first visit to US Mosque. In his exact words — I know that in Muslim communities across our country this is a time of concern and, frankly, a time of some fear. Like all Americans, you’re worried about the threat of terrorism, but on top of that, as Muslim-Americans, you also have another concern, and that is your entire community so often is targeted or blamed for the violent acts of the very few.

Reiterating his commitment to ‘freedom of religion, the US Prez added — The best way to fight terrorism is to show the US does not suppress Islam and refute lies to the contrary….An attack on one’s faith is an attack on all our faiths…We have to respect the fact that we have freedom of religion… As we protect our country from terrorism, we should not reinforce the ideas and the rhetoric of terrorists themselves…We must never give them that legitimacy.

Obama, opposing the idea of religious profiling, sternly added — Engagement with Muslim Americans communities must never be a cover for surveillance. As we go forward, I want every Muslim American to remember that…your fellow Americans stand with you…you are not Muslim or American. You are Muslim and American…This is not a clash of civilisations between the West and Islam…We are one American family. We will rise and fall together.

In this first-ever visit to a US mosque as the President, Obama assured Muslim-Americans that US will be their partner to help them promote pluralism and peace.

Referring to the plight of those facing attacks due to religious choices, Obama categorically said — Recently we’ve heard inexcusable political rhetoric against Muslim-Americans that has no place in our country. No surprise, then, that threats and harassment of Muslim-Americans have surged…Here at this mosque twice last year, threats were made against your children. Around the country, women wearing the hijab, just like Saba, have been targeted. We’ve seen children bullied. We’ve seen mosques vandalized. Sikh-Americans and others who are perceived to be Muslims have been targeted as well… Like so many faiths, Islam is rooted in a commitment to compassion and mercy and justice and charity. Whoever wants to enter paradise, the Prophet Muhammad taught, let him treat people the way he would love to be treated. ..The world’s 1.6 billion Muslims are as diverse as humanity itself. Mogadishu: The ruling government of Somalia issued a ban on global festivity of Christmas as well as discouraged New Year celebrations in the Muslim country on the pretext of religion based celebrations. The government issued a statement indicating that such celebrations were not related to the majority community of Somalia which followed Islam as its religious discourse. Sheikh Mohamed Kheyrow, Director of Somalia’s ministry of religion, said on state radio — The festivities have nothing to do with Islam. We warn against celebration of Christmas, which is only for Christians. This is a matter of faith. The Christmas holiday and its drum beatings have nothing to with Islam.

Kheyrow added that ministry had sent letters to police, national security intelligence and officials in the capital Mogadishu instructing them to prevent Christmas celebrations. The announcement had tones akin to Islamist militants al Shabaab, which earlier controlled the capital Mogadishu until 2011. The dictats of the then militant group included a ban on Christmas celebrations. The population spread of Somalia is leaning heavily towards followers of Islam, the Muslim community. But the population density also comprises of thousands of African Union (AU) peacekeepers, mostly aligned to pro-Christian countries like Burundi, Uganda and Kenya. Migratory polulation of this country, which is struggling to emerge from two decades of fighting and chaos, also stands witness to a growing number of Somalis returning from Europe and North America. These migratory home-comers do carry a bit of foreign traditions and attitudes with them, and it is interpreted as a warning to these group of migratory residents.

Officials from the ruling government also pointed towards the rising unrest of terrorism and said that Christmas celebrations might attract attacks from the Islamist militants al Shabaab and the government was determined to guard against any such disruptions in the normalcy of Somalia.