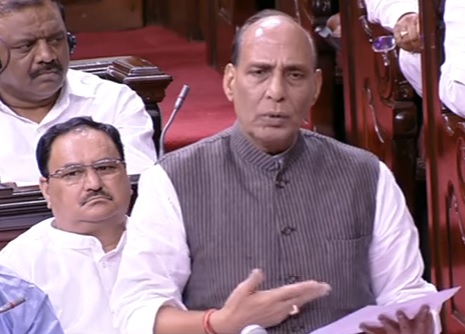 New Delhi: After 33 days of curfew imposed to control mobs that went berserk on the streets of Kashmir following the killing of the Hizbul Mujahideen terrorist Burhan Wani in an encounter earlier in July, Rajya Sabha – the Upper House of Parliament today unanimously passed a resolution appealing to all sections of the society in Jammu & Kashmir to work for the early restoration of normalcy and harmony in the State.

The House has expressed its serious concern over the prolonged turbulence, violence and curfew in the Kashmir valley and conveyed its “deep sense of anguish and concern over the loss of lives and critical injuries caused by the deteriorating situation.”

The resolution also categorically says that the House is of the firm and considered view that while there cannot be any compromise on national security, it is equally imperative that urgent steps are taken to restore order and peace for the alleviation of the sufferings of the people.

The Upper House of Parliament has resolved to restore the confidence among the people in general and youth in particular.

Before the House passed the resolution on the prevailing situation in Kashmir, leader of the Communist Party of India (Marxist) Sitaram Yechury suggested that the resolution should specifically say that the “confidence among the people in general and youth in particular” will be restored through dialogue or the democratic process. Union Home Minister Rajnath Singh responded to this by saying he has alrady covered this point in his speech and on his assurance that there will be a dialogue with the stakeholders in Kashmir to restore peace, the House uninimously passed the resolution.

Earlier addressing the House, the Home Minister announced that the Centre has called for an all-party meeting on August 12 to restore normalcy in Kashmir. He also blamed Pakistan saying whatever is happening in Kashmir is sponsored by Pakistan.

Opening the marathon day-long debate on Kashmir, Leader of Opposition in the Rajya Sabha Ghulam Nabi Azad took a dig at Prime Minister Narendra Modi saying he did not find time to come to the House and make a statement on Kashmir even though the issue has been raised several times during the current session.

While there was a general consensus on starting the process of dialogue with the stakeholders, Azad also talked of integrating the hearts and minds of the people of Kashmir with others across the country. But the House preferred to keep on the backburner the issue of a vast population of Kashmiri Hindus who have been driven out of their homes in the Kashmir valley and have been forced to live as refugees in their own country.