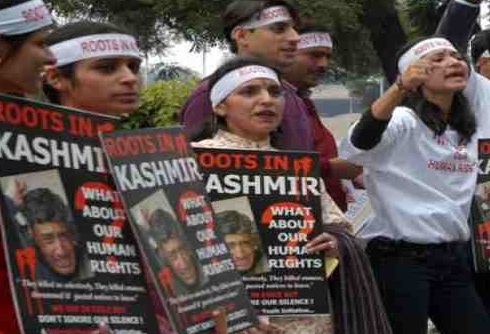 Dr. Ramesh Tamiri has expressed much distress at what he considers the sidelining of Kashmiri Pandits in the ongoing talks between the government of India and the Gupkar gang in Kashmir. His concerns remind me of the article that another friend of mine wrote many months ago. Swaran Preet Singh wrote in the context of Kashmir about the absence of a recognition that Sikhs are a persecuted community. Any community which wishes to be heard needs to become extraordinarily touchy about its existence. It is the touchiness that communicates to the rest of the world that a community exists and it needs to be respected. The Sikhs, by creating an identity around the Indian state of Punjab, have used such touchiness in the past two decades to assert a distinct Sikh identity. In the case of the Kashmiri Pandits, their initial stoic silences worked against them. Far from appreciating their suffering, there were some, journalists, Kashmiri Pandits, academics in general, who began to construct an image of the Kashmiri P andits being an oppressor group. Despite all the persecution they have suffered at the hands of the radicalised Islamists in Kashmir, the broad vision as propagated till recently by the likes of Barkha Dutt was that they were actually exploiters of the Muslims in Kashmir. That apologia for Islamism in Kashmir was fortunately rendered ineffective by the changes in Kashmir introduced by the Narendra Modi government. Today even Pakistan hesitates in providing overt military backup to Islamists crossing the border.

The company in question is Dwaar Chocolate – a craft chocolate company operating out of Metro Detroit, Michigan in the US. It boasts of “handmade bean to bar chocolate” and flavors from around the world. This company has crossed limits by producing and marketing a specially crafted chocolate by giving it the shape of Lord Ganesha.

The idol of Lord Ganesha, the most revered and leading Hindu deity, is worshipped by the Hindus and for the devotees it is nothing but sacrilege to note that the “Hindu god Ganesha, rendered in dark chocolate by Dwaar Chocolates, of East Township, Mich. (as reported by New York Times) is being marketed online and is available to be devoured by chocolate lovers.

Founder of Sanatan Mission, Lalit Shastri has taken strong exception to the US company now selling Lord Ganesha made of dark chocolate. Lalit Shastri, who is popular among his followers as Guru Lalitendra, announced ahead of Diwali, on Thursday 12 November 2020 that his organisation is going to slap a law suit against the US company that has indulged in a practice that amounts to hurting the religious sentiments of the devout Hindus. Sanatan Mission would be taking legal steps for punitive damages to ensure no company or person is able to offend the faith and religious sentiments of others in future in this manner.

Guru Lalitendra said all should desist from reducing God’s into eatables. He went on to explain the logic behind “Ganesh Visarjan” saying there is a deep philosophy and a glorious tradition linked with this religious practice. Explaining the symbolism behind the immersion of Lord Ganesha’s idol in sea, river or water bodies, he said the immersion of the clay idol of Lord Ganesha is a celebration of life. It symbolises the life cycle and continuity of our existence.

On scanning digital media, it has been found by Sanatan mission that there are several persons in India, who are also engaged in making and promoting Chocolate Ganesha. There are also online shopping platforms like Amazon selling “Ganesha GOD Shaped PVC Chocolate Mould”. Sanatan Mission will seek legal remedy to clamp a ban on this, announced Guru Lalitendra.

Newsroom24x7 Wishes One and All a Very Happy Dussehra

Vijayadashami is observed and celebrated by Hindus across the world and with great fervor in the Indian subcontinent. In the southern, eastern, north-eastern, and some northern states of India, Vijayadashami marks the end of Durga Puja to mark Goddess Durga’s victory over Mahishasura to protect dharma. In the northern, central and western states, the festival is called Dussehra. It is to celebrate Lord Rama’s victory over Ravana – symbolising the victory of good over evil. 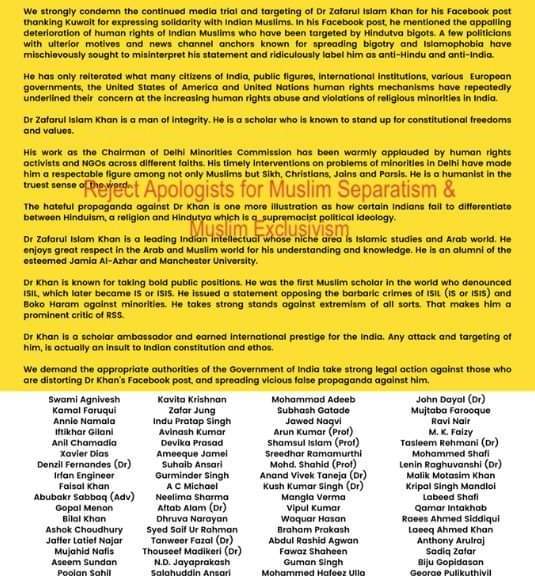 The Muslims who voted for a separate country for Muslims were the ones who had a degree and or were an officer working for the government, had large properties and or paid a high tax. These were the Muslims who used to complain that the Hindus were better at all these activities (government jobs, earning degrees, running businesses). These incompetent elite Muslims hoped that once they had a country to themselves they would dominate it and get ahead quickly. As we know their dreams were shattered.

Pakistan emerged as one of the most incompetent country and the country was soon overwhelmed by the Punjabis who had never before voted for the Muslim League. Not only that the Punjabis quickly sidelined the Muslim League, eliminated its leaders and took full control over Pakistan. Of course, taken in by the rhetoric of religion and nationhood that the incompetent Muslim elite put forward, the poorer Muslims, mostly from artisanal classes and a few micro-sized shopkeepers, picked up their bags and started moving towards Pakistan. It is these who paid a heavy price for the dreams of their incompetent religion mates. That Hindus of all classes had to suffer tremendously, India as a whole had to suffer heavily the sowed seeds of distrust that continue with us till today. It is in these seeds of distrust that start sprouting everytime someone like Zafarul-Islam Khan makes a foolish statement. Whether he is doing so unthinkingly or after due care does not matter. The consequence remains the same– it fosters distrust of a very high order against the Muslims.

As for the Muslims who remained in India after partition, do remember two things:

One, that lakhs of Muslims actually came back to India from Pakistan once the madness was over. During the 1948-1955 period, hundreds of thousands of them returned and were given lands and properties and not a single Hindu returned to Pakistan.

Two, many who stayed back do believe firmly in being part and parcel of the general population of India. Time and again they have demonstrated that they neither suffer from any discrimination, nor do they have any complaints against India or Hindus, nor are they unwilling to live in India as normal Indians, facing all the troubles and privileges of normal Indians.

So, where does the problem lie?

Everyone knows of those who are promoting Muslim exclusivism and Muslim separatism.

These are the social and cultural elite nurtured by the Congress eco-system. Even today the Indian National Congress provides them with support.

The thing to figure out is:
(1) Why are they doing so? Merely a hatred for Narendra Modi cannot be such a strong driving force since their behaviour far pre-dates the public arrival of Modi.

(2) What can be done to stop their influence from growing among the common Muslims of India?

For, as a lie repeated a few times ends up being considered a truth. If the people who are spreading Muslim separatism and Muslim exclusivism are not stopped today they are likely to occupy the minds of a much larger number of Muslims. After all they did manage to convert poor Zafarul-Islam Khan to their point of view. It was just that Zafarul did not have the sliminess of the LeLi and ended up making a public statement on social media. We have already seen how the Kathmullas took over Pakistan entirely and kicked out the LeLi , the Left and Liberal people from that country.

(3) Why are the common people of the Islamic faith in India scared of publicly opposing such elements among Muslims and among non-Muslims?

(4) Why are the generality of Muslims silent even while they do not agree with the people who are promoting Muslim separatism and Muslim exclusivism?

(5) What can be done to remove the fear of their kathmulla elites from the people of India who follow the Islamic faith?

The author, Rajiv Lochan, a JNU alumnus, is a renowned historian, scholar and academician