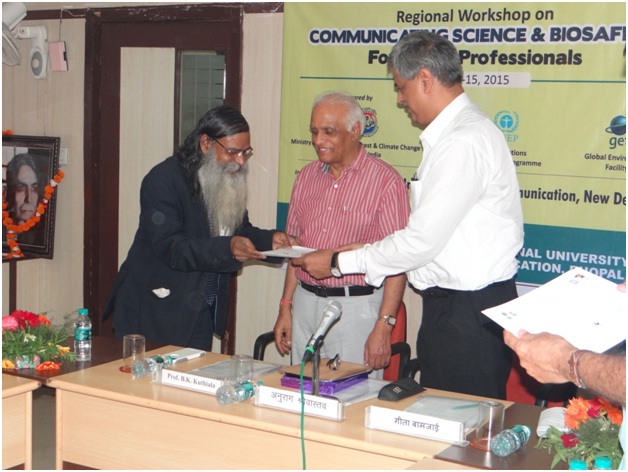 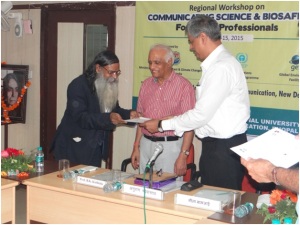 The workshop on Biosafety underscored various aspects of handling, transfer and effective put-to-use of living botanical organisms which have been modified through modern technology.

The central idea revolved around these basic points of curiosity –

‘One India’ model seems to have buckled under the divided quarters of GM technology, as different States in India have opted diverse approval parameters. For instance, Madhya Pradesh trails in rendering spontaneous field trial permissions as compared to several progressive GM-minded States.

Biosafety issues dominate the Agri-techno adaptability of GM Crops. The scenario in India is akin to the World stage as India too stands at a crossroad of embracing GM only half-heartedly because Organic Farming scores the top rank.

Yet, all is not so grim and dull for the advent of a new brand of Indian-born GM botanical species. Revolution in plant biotechnology  and Genomics has definitely opened new avenues for “Desi plant breeders”. A brilliant hope of functional Crop improvement techniques lies hidden under the camouflaged layers of GM dichotomy.

Still, the pros and cons of GM crops fail to negate each other conclusively. The risks arising due to use of GM crop spreads across the botany and zoology of living inhabitants.Safety concerns have given birth to stringent regulatory regimes and forced many States like MP to simply discourage successful field-trials.

Bt Cotton had its thrust on just the producer (read farmer). But the colonial Bt cousins like Brinjal and other GM Crops like potato, cabbage appear to be sitting on the hindrance fence. This is so because these GM Crops affect both the producer (farmer) and the consumer (we, the people). The edible world of Indian GM crop is facing many field-trial hiccups across the nation’s geography.

The IIMC is holding the baton and crafting serious efforts to make Media interpret the goodness of Living Modified Organisms (LMO) and the Genetically Modified Organisms (GMO), and reach it across to a wider public audience. If you are here till this part of the article, it might so suggest that this endeavour has partly succeeded !

The Environment Ministry is crafting extra efforts to create a Biosafety Awareness drill nationwide. With a Cartagena Protocol very much in place since long, and a Nagoya-Kuala Lampur Supplementary Protocol having grabbed 31 country partners, biosafety is attempting to stand on firm grounds, albeit resistance at many State regions here.

The speed is slow, speed breakers are innumerable, and there are miles to go in this divided-lane. Yet, the work has been initiated long back. And India is taking small but firm steps and is catching up in finding its own place in the GM carnival.