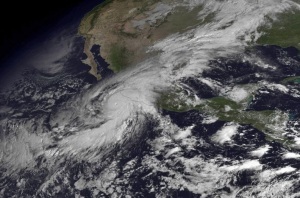 Mexico : US National Hurricane Center issued alarming warnings and triggered off massive evacuations and hectic vacate plans, stating, ‘Potentially catastrophic Hurricane Patricia should make landfall in Mexico in the next several hours.’ The centre added that it has been projected as the strongest storm that had recorded in the eastern Pacific or the Atlantic. Data showed that the formation of Hurricane Patricia has already produced the third lowest barometer reading ever recorded – a pressure of 880 millibars at the centre of the storm.

The strongest hurricane ever recorded is bearing down on Mexico’s Pacific coast, threatening a potentially catastrophic landfall. Tourists have begun to queue for buses in Puerto Vallarta after evacuation orders have forced them to leave their hotels and move to safer shelter areas.

Mexican authorities have begun evacuating residents ahead of the arrival of Hurricane Patricia. The storm stands comparable to Typhoon Haiyan, which killed 6,300 people in the Philippines in 2013, according to information released by World Meteorological Organization. A state of emergency has been declared in three states in Patricia’s path. The category five hurricane is expected to make landfall in the next few hours, with winds of 305km/h (190mph).

Some 400,000 people live in vulnerable areas. The hurricane, which gets preceded by torrential rains, could trigger flash floods and mudslides, and a situation of potential flooding from the sea and destructive waves is not ruled out. The hurricane’s winds of such intensity have often found to be strong enough to get a plane in the air and keep it flying, and shaking trees and fragile dwelling units out of its roots in the ground.

According to forecasters, Patricia will make landfall in the western state of Jalisco, home to the resort town of Puerto Vallarta, which could lie directly in its path. Police patrols in the resort urged people to leave the vicinity and move to safer areas at least three blocks inland, while loudspeakers ordered hotel residents to evacuate.The town’s airport, along with two others in the path of the storm, were closed. Educational institutions like Schools have been closed in Jalisco, Colima and Guerrero states.People are being directed to moving into less vulnerable and safer shelter areas, with proper guidance from administration.