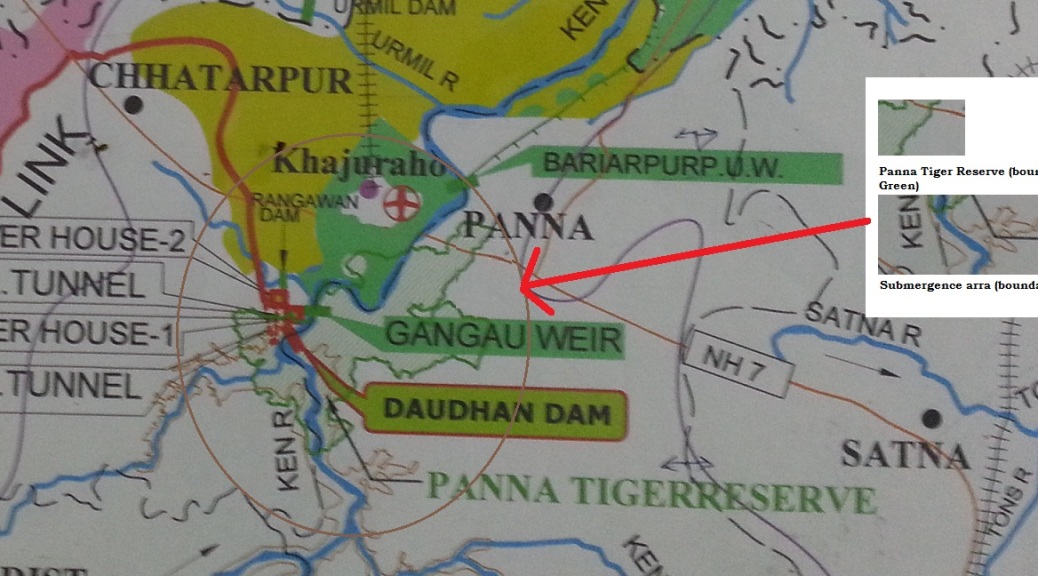 The environment clearance was granted after a detailed presentation on forest and wildlife issues was made at the December 30 meeting of the Environment Appraisal Committee.

According to the minutes of the Environment Appraisal Committee meeting held on 30 December, 2016, it was noted at this meeting that the project envisages construction of 77 m high and 2,031 m long composite dam across Ken river near village Daudhan in Chhatarpur District of Madhya Pradesh to provide irrigation facility to 6.35 lakh ha area of land, drinking water facility and generation of 78 MW hydropower. Two (2) powerhouses, viz., (i) 2 units of 30 MW capacity each, and (ii) 3 units of 6 MW capacity each are proposed to be constructed. Two (2) tunnels of 1.9 km long upper level and 1.1 km long lower level tunnel and 221 km long Ken-Betwa link Canal Phase-I on the left bank of the river are proposed to constructed. It is proposed to provide irrigation facility in 6,35,661 ha of area in Panna, Chhatarpur, Tikamgarh District of Madhya Pradesh and Banda, Mahoba and Jhansi Districts in Uttar Pradesh. Total submergence area is 9,000 ha, out of which 5,258 ha is forestland (it includes 4,141 ha in Panna Tiger Reserve). A total of 10 villages consisting of 1,585 families are likely to be affected by this project. Panna Tiger Reserve falls within the 10 km radius of the project. The total cost of the project is about Rs.9,393 Crores and it is likely to be completed in 9 years.

The project was earlier considered by the EAC in its meetings held on 24- 25th August, 2015, 26-27th October, 2015 and 8-9th February, 2016.
The EAC noted that the e-flows have been calculated on the basis of approved monthly flow series for the 75% dependable year (1988-89). Ken River is a non-perennial river and the 75% dependable year i.e. monsoon season (June-September) run-off is 6541.56 MCM. The average non-monsoon/non-lean season (October-January) run-off is 9.11 MCM, whereas there is negligible run off during the lean season from February to May. Out of the total run off at Daudhan dam site, 2,266 MCM of water is earmarked for proposed upstream utilization and the monthly distribution on pro-rata basis. The e-flow are presented below:

The committee was informed that while considering the project by EAC in its meeting held on 24-25th August, 2015, the EAC had noted that the Panna Tiger Reserve was being affected very significantly and that all aspects of this project in relation to this disturbance to the reserve need to be studied and assessed more carefully. EAC had also noted that the Landscape Management Plan (LSMP) is being prepared by WII for the mitigation measures to be taken up in the Panna Tiger Reserve/ Ghariyal Sanctuary. Since, many of the members of the EAC are from expert organizations, which are responsible for the preparation of the LSMP there could be some conflict of interest. In fact one of the members had sought opinion on this and he was advised to recluse himself when this project is discussed. Under the circumstances it will be appropriate that a second opinion from a non-government expert is obtained. EAC should dwell on this in the next meeting and select the external expert for the purpose.

The project proponent submitted compliance report and additional information and the same was again reconsidered by EAC, in its meeting held on 2-3rd June, 2016. The project was discussed in detailed and issues raised in earlier meetings were clarified by the project proponent. It was also informed that the Environmental Management Plan (EMP) has been prepared and predicted impact on actual requirement and incorporating suggestions of people, etc. therein. The detailed budget estimated in the EMP are presented below: 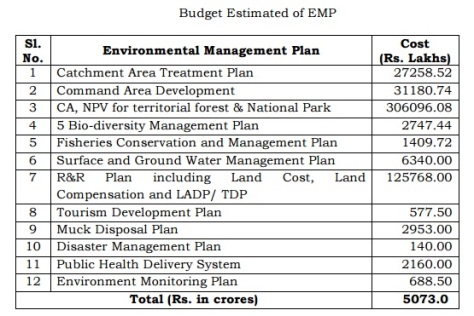 The project proponent also informed that the WII, Dehradun has sought minimum 3-year time for formulation of the Landscape Management Plan for the Panna Tiger Reserve which will be affected by the project. The EAC mentioned that the matter be expedited to 3-4 months for completion of LMP and after finalizing LMP, the same will be appraised by the EAC for EC.

The project proponent submitted the compliance report and the same has been considered by the newly reconstituted EAC in its meeting held on 30.12.2016. The project proponent made a detailed presentation. NTCA has made a detailed presentation on Landscape Management Plan. In the presentation, it was mentioned that the LMP shall be an exhaustive document to be prepared considering various factors and it cannot be completed in a shorter period of time.

It was also mentioned that while preparing LMP, monitoring is to be carried-out at the pre-project stage, during construction phase and post-construction phase. The LMP mainly envisages the accommodation of the movement of tigers from the PTR to nearby forest conservation areas/wildlife sanctuaries. It would also consider upgradation of these conservation areas/wildlife sanctuaries to Tiger Reserves. Therefore, the LMP issue is to be delinked from the issue of EC for the Ken-Betwa Link Project Phase-I as it is a long-term management plan for Tiger conservation in the PTR area.

The new EAC was also informed that it was decided in the 2-3rd June, 2016 of EAC meeting that a meeting be convened by NWDA among Shri H.S. Kingra, Vice Chairman of the then EAC, MoEF&CC officials with Director, WII, Dehradun for expediting the finalization of the LMP within 3-4 months instead of 3 years. It was intimated by NWDA that the said meeting could not be convened due to paucity of time among the above officials and subsequently, the tenure of EAC ended on 03.09.2016. As the EAC couldn’t be re-constituted immediately after validity period, the Competent Authority in the MoEF&CC approved to convene the aforesaid meeting which was convened on 30.11.2016. In the said meeting, Dr.
H.S. Negi, IG (Forest), NTCA, Dr. S. Kerketta, Director (River Valley), MoEF&CC, Dr. K. Ramesh, Scientist ‘D’, WII, Dehradun and Officials from NWDA attended. WII gave a detailed presentation on the preparation of LMP. A consensus was arrived among the officials present in the meeting and it was decided that i) NTCA to give a brief presentation before the EAC in its next immediate meeting to appraise the preparation of LMP and ii) As the scope of the LMP was different and covers beyond the study area of EIA/EMP report of Ken-Betwa Inter-Linking Project, it should be
delinked from the perspective of the Environmental Clearance.
The NWDA further informed that the Standing Committee of National Wildlife Board in its 39th meeting held on 23.8.2016 has recommended the project for clearance. The Ministry issued wildlife clearance for Ken-Betwa Project in Madhya Pradesh on 21.9.2016 with the following conditions:

i. the conditions prescribed by site inspection team and NCTA, as agreed by MoWR and that the resultant reservoir area shall be retained as core area with minimum activities for management purpose under close consultation with the Tiger Reserve Management. The landscape based plan for the area will be finalized with NCTA in lead, assisted by WII, State Forest department and project proponents.

ii. the effort to integrate the said 3 wildlife sanctuaries within the PTR will be undertaken simultaneously and the management objective of these areas will be in context of treatment of the area as a part of tiger landscape.

Requirement of all extant statues related to environment and forest including EC and FC shall be met as applicable. After detailed deliberation, discussion and considering all the relevant facts of the project as presented by NWDA, the EAC noted that the scope of the LMP is quite large. There is a wide perspective in regards to the implementation of LMP beyond the affected areas of the proposed project. Hence, EAC agreed to delink the same from this proposed project for EC purposes and recommended the project for grant of EC with the following conditions:

i. As the submergence area is very large (about 9,000 ha), micro-climatic change conditions in the project area during construction/post construction period to be brought-out/reported at regular intervals.
ii. Impact due to habitat change having effect like corridor and loss of migratory path for wildlife including birds and impact on the breeding
ground of species should be recorded during pre-construction/post-construction stages.
iii. Plans for greenbelt development and reservoir rim treatment plan have to be made in consultation with State Forest Department. Preference shall also be given to plant local indigenous species. If possible, transplantation of trees from the submergence area of the project be taken up and these may be re-planted in the affected area of the project as a part of LMP.
iv. The PTR is facing acute shortage of water and due to creation of reservoir, the water regime will improve to a great extent. The extent of creation of pasture land due to receding of submergence, increase of herbivorous population, growth in vulture population as well as increase in Tiger population be recorded in the project area.
v. While implementing the LMP for PTR, EAC suggested that as and when the Land Management Plan, etc. are taken up in the affected areas of the KenBetwa Link Project Phase-I, status of implementation of the same shall be submitted to the Ministry and Regional Office, MoEF&CC, Bhopal for its monitoring on six monthly basis.
vi. All conditions stipulated in the NBWL clearance should also be included in EC letter.
vii. Solid waste generated, especially plastic waste, should not be disposed of as landfill material. It should be treated with scientific approach and recycled.
viii. An e-mail was received by the Chairman and the Members of EAC, drawing attention to a notification dated Oct. 2016 from MOWR, RD&GR that prohibits any construction within the larger Ganga basin rivers. When clarification was sought from NWDA, it was informed that this notification applies to only those constructions that cause pollution because otherwise,
it may mean that even a bridge cannot be constructed across any river in the Ganga basin. After deliberating over the matter, the EAC directed the Member – Secretary to clarify this point with the Director General, NMCG, MOWR, RD&GR before taking approval of the competent authority for issue of EC.
ix. Six monthly compliance reports shall be submitted to Regional Office, MoEF & CC, Bhopal without fail until completion of the modernization works.