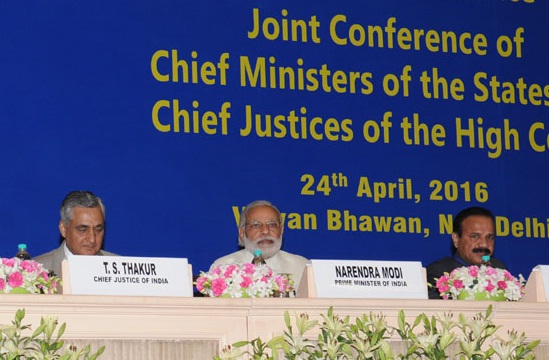 Chief Justice of India TS Thakur was emotionally surcharged on Sunday when in a choked voice he raised the issue of the large number of cases pending in various courts and pointed out that the judiciary continues to be overburdened.

The CJI was addressing a Joint Conference of Chief Ministers and Chief Justices of the High Courts on Sunday in front of Prime Minister Narendra Modi.

The CJI said it will not be proper to put all the blame on the judiciary since it was the responsibility of the executive to bring about judicial reforms. The reforms are essential not only for the undertrial prisoners languishing in jails but also for the sake of development and progress of the country, is what the CJI chose to convey on this occasion.

Referring to the speech of the Chief Justice of India, the Prime Minister said that he understood the Chief Justice’s concern. He went on to express the hope that the Government and the Judiciary could work together to find solutions to these issues.

The Prime Minister also stressed on the efforts being made by the Government to remove archaic laws from the statute books.

The problem of an overburdened judiciary underscored by the CJI today was also highlighted by me on my social networking site two years ago. I wrote:

If we can afford a massive uniformed and disciplined force to defend our borders why can’t the nation support the judiciary and a system of subordinate courts with adequate resources and manpower to protect people’s right to speedy, fair, corruption-free and an affordable legal system. The huge backlog of cases and the much accepted system of judges holding a final verdict by marking so many cases as ‘reserved for order’ at the end of long drawn hearings or just advancing dates to suit the advocates’ convenience is a travesty of circumstances for those caught in legal wrangles.

A review of the situation regarding judiciary and pending cases after the related issues have been acknowledged and brought in the public domain both by the Prime Minister and the Chief Justice of India by Newsroom24x7 shows that a lot of ground will have to be covered to bring about any perceptible difference in the situation when it comes to the disposal of pending cases.

Till the end of September 2015, against a sanctioned strength of 31, there were three vacancies (of judges) in Supreme Court.

Significantly 43376 cases were pending in Supreme Court for more than a year out of the 59910 pending cases on 30 September 2015. A closer look at these figures however shows that if connected matters were to be excluded, the pendency in real terms was 36414 matters on 30 Septemer 2015 and even this number is on a higher side at the Apex court level.

On June 30, 2015, the situation with regard to vacanices in High Courts was on the higher side. The Allahabd High Court was topping the list with 81 vacanceis followed by the High Court of Punjab and Haryana with 31 vacancies and Karnataka 30 and Bombay 29.

On September 5, 2014, a three Judge Bench of the Supreme Court presided by the then Chief Justice of India R.M. Lodha had directed judicial officers across states in India to review the situation in their districts and ensure the release of undertrial prisoners who had been in detention for half the maximum period of imprisonment prescribes under law for the offence they were being tried in court. This order excluded those who were being tried for murder. The then CJI had especially drawn attention to the gravity of the problem by pointing out that 66 per cent of the prison inmates in the country were undertrial prisoners.