In this video, we have  Senthamizhan Seeman,
leader of Tamil Nadu party,  Naam Tamizhar, which means “We Are Tamils”,  railing against the vulgar casteism of the Dravidian barbarians.

“You are willing to accept Muslims and Christians in Tamil Nadu as true Tamils, although they have been here only a few centuries. But abuse brahmins who have lived on TN soil for several millennia longer and referred to as Aryans and Parpaan – both these words are used as a derogatory term for brahmins.

You have taught us that poet Bharathi and  UV Swaminatha Iyer, popularly called UVS are not true Tamils!  And display your vulgarity and bigotry by calling them ‘Parpaan’! Is there anyone who has done more for Tamil than these great men?

UVS was a Tamil scholar and researcher who was instrumental in bringing many long-forgotten works of classical Tamil literature
to light. It was primarily due to his efforts that the world came to know the literary output of the ancient Tamils and their past.

Tamil poet and nationalist Subramania Bharati, who inspired the freedom movement with his songs, equated UVS with the Sage Agastya.

In his words: ”So long as Tamils live, poets will venerate you and pay obeisance to you.”

Dhaka: “From the barbaric attack on Gulshan restaurant in Dhaka and other murder incidents in recent times, it is clear that some local and international quarters are out to destabilize the country and foil its advancement through such incidents. They are radicalizing the tender-hearted youths and juveniles to wrong directions by misguiding them in the name of religion and making them killing people. This group wants to tarnish the image of Bangladesh using religion and discredit the Government both at home and abroad as well as create a sense of fear and insecurity among our people. They do not like the secular values that the government is promoting and want to prove Bangladesh as a failed state.”

This was observed by the Bangladesh State Minister for Foreign Affairs Mohammed Shahriar Alam, at the Roundtable on Terrorism, Religion-based Politics and Secularism this past Sunday (28 August 2016) at Dhaka University’s Senate Bhaban.

Alam said that the Banglqadesh Government strongly condemns both the politicizing of religion and use of religion to justify terrorist or violent extremist acts. “We firmly reject any narrow, misinterpretation of Islam, our religion of peace”, he asserted.

The Bangladesh Foreign Minister said that the law enforcing agencies are verifying if the terrorists had received any guidance from the international terrorist groups. Whoever is involved, the Government is determined to arrest the criminals and put them behind the bar. At any cost, the Government will break the nexus between terrorism, extremism, and radicalization and eliminate them all from Bangladesh.

Alamstated in categorical terms that freedom of religion is a corner stone of Bangladesh Constitution. The Fifteenth Amendment to the Constitution has restored “Secularism” as one of the fundamental pillars of state policy. While Islam is recognized as a State Religion, the Constitution also recognizes the equal rights for the practice and promotion of other religions, including Hinduism, Buddhism and Christianity. It also states that every religious community or denomination has the right to establish, maintain, and manage its own religious institutions. Bangladesh Government pursues an equitable approach in promoting different religious institutions and practices with a view to upholding its multi-religious, multi-ethnic and multi-cultural identity and in line with that actively advocates the motto: “Each unto his or her religion, Festivals are for All”.

Alam stated that the Bangladesh Government maintains a ‘zero tolerance’ approach to any form of violence, terrorism and discrimination against the minorities, both based on religion and sects of any particular religion, under any excuse.

In line with the provisions of the Constitution and the directives of the Father of the Nation, the present Government under the leadership of Prime Minister Sheikh Hasina continues to nurture unequivocal efforts to actively promote non-communal ethos and peaceful coexistence, emphasised Alam.

Concluding his remarks, Alam said: “To reverse the radicalization trend among certain segments of our youth and foil the religion-based politics, we need sustained support from all corners of our society, from our civil society to religious leaders, from our media to private sectors- for advocacy against terrorists and violent extremists. Our media, mosques and other religious institutions can play a pivotal role in awareness building campaigns and projecting comprehensive counter-narrative in the backdrop of the recent terrorist attacks.” 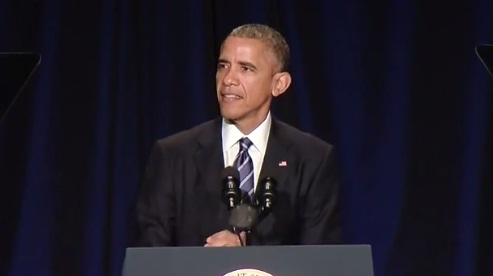 Washington DC, Feb 6: US president Barack Obama Thursday praised the Dalai Lama as “a powerful example of what it means to practice compassion,” and also talked of professions of faith used both as an instrument of great good, but also twisted and misused in the name of evil.

Mr. Obama was addressing the National Prayer Breakfast at the Washington Hilton Thursday morning. The Dalai Lama was also present. As we speak, Mr. Obama said, around the world, we see faith inspiring people to lift up one another — to feed the hungry and care for the poor, and comfort the afflicted and make peace where there is strife, the President said adding but we also see faith being twisted and distorted, used as a wedge — or, worse, sometimes used as a weapon. From a school in Pakistan to the streets of Paris, we have seen violence and terror perpetrated by those who profess to stand up for faith, their faith, professed to stand up for Islam, but, in fact, are betraying it. We see ISIL, a brutal, vicious death cult that, in the name of religion, carries out unspeakable acts of barbarism — terrorizing religious minorities like the Yezidis, subjecting women to rape as a weapon of war, and claiming the mantle of religious authority for such actions.

Mr. Obama drew attention to the sectarian war in Syria, the murder of Muslims and Christians in Nigeria, religious war in the Central African Republic, a rising tide of anti-Semitism and hate crimes in Europe, so often perpetrated in the name of religion.

So how do we, as people of faith, reconcile these realities — the profound good, the strength, the tenacity, the compassion and love that can flow from all of our faiths, operating alongside those who seek to hijack religious for their own murderous ends? Mr. Obama asked

Humanity, Mr. Obama pointed out, has been grappling with these questions throughout human history. And lest we get on our high horse and think this is unique to some other place, remember that during the Crusades and the Inquisition, people committed terrible deeds in the name of Christ. In our home country, slavery and Jim Crow all too often was justified in the name of Christ.

The president said: “Michelle and I returned from India — an incredible, beautiful country, full of magnificent diversity — but a place where, in past years, religious faiths of all types have, on occasion, been targeted by other peoples of faith, simply due to their heritage and their beliefs — acts of intolerance that would have shocked Gandhiji, the person who helped to liberate that nation.”

In a message on the fresh spate of violence in Bangladesh, US Department of State Deputy Spokesperson Marie Harf Thursday said; “We deplore the unconscionable attacks including bus burnings, throwing incendiary devices, and train derailments that have killed and wounded innocent victims. We condemn in the strongest terms the use of violence for political objectives. There is simply no justification for such actions in a democratic Bangladesh. All Bangladeshis must have the right and the ability to express their views peacefully. We call on the government to provide the necessary space for peaceful political activity, and for all parties to instruct their members to refrain from violence.