Bhopal: Shivraj Singh Chouhan was administered the oath office as Chief Minister of Madhya Pradesh at a swearing-in ceremony at Raj Bhawan here on Monday, 23 March 2020. 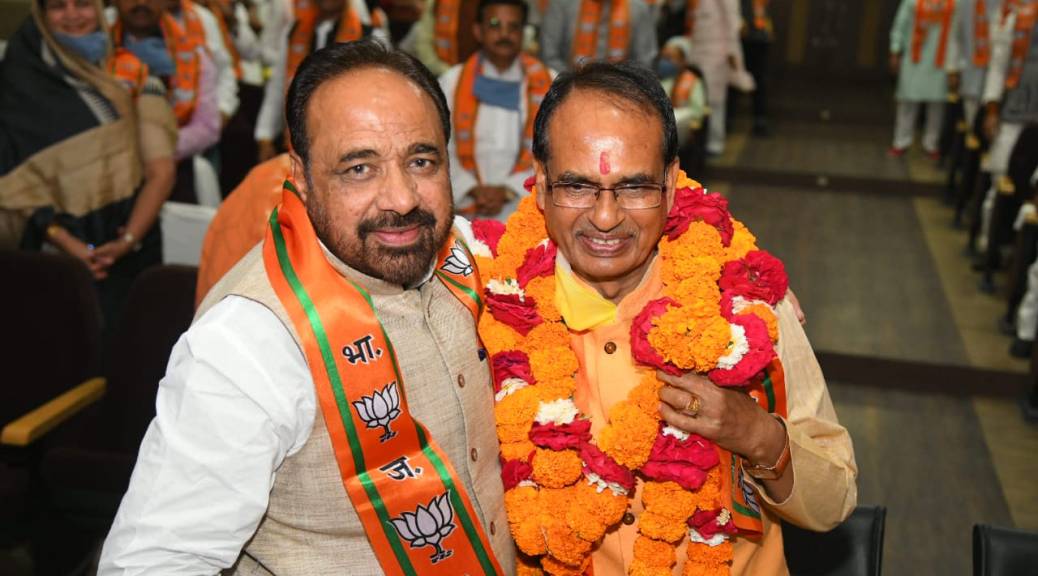 Bhopal: Shivraj Singh Chouhan will be administered the oath of office as Chief Minister of Madhya Pradesh for the fourth time by Governor Lalji Tandon at Raj Bhawan tonight, 23 March 2020 .

Chouhan was elected leader of BJP Legislative Party at a meeting of BJP legislators held at the BJP headquarters here on Monday evening.

The BJP is returning to power in the State after 15 months of Congress rule. After the 2018 general election to the State Assembly, Congress party, though it lacked majority formed the government with the support of Independent, Samajwadi Party and Bahujan Samaj Party MLAs. The Congress Government led by Kamal Nath plunged into crisis earlier this month after Jyotiraditya Scindia dumped the Congress and joined BJP and 22 of his loyal Ruling party MLAs, including 6 cabinet ministers also resigned. Kamal Nath was unrelenting and chose to avoided the Governor’s instruction to go for a floor test.

The political wheel went full circle when the Supreme Court, responding to a petition by Chouhan, ordered a floor test and without facing the acid test Nath submitted his resignation, which was immediately accepted by the Governor.

The common munimum programme states: “On contentious issues of national importance as well as state importance having repurcussions or consequences on secular fabric of the nation, the Shiv Sena, the NCP and the Congres will take a joint view after holding consultaions and arriving at a consensus.”

Congress President Sonia Gandhi said in a message to Uddhav Thackeray: “Shiv Sena, NCP and the Congress have come together under quite extraordinary circumstances at a rtime when the country faces unprecedented threats from the BJP.”

Ahead of his swearing-in Uddhav Thackeray resigned as Editor of Saamna , the Shiv Sena mouthpiece

Thackeray started his political career as campaign incharge of Shiv Sena in Brihan Mumbai Municipal Corporation elections in 2002. In 2003 he was appointed as working president of Shiv Sena. Uddhav took over as chief editer of party mouthpiece Saamna.His cousin Raj Thackeray left Shiv Sena in 2006 to form his own party named Maharashtra Navnirman Sena. After demise of his father Bal Thackeray in 2012 he led the party and got elected as Shiv Sena president in 2013. Under his leadership Shivsena joined NDA government in Maharashtra in 2014.

Mumbai: The political impasse ended in Maharashtra on Saturday with Governor Bhagat Singh Koshyari administering the oath to Devendra Fadnavis as chief minister at the Raj Bhavan here at around 7.30 am on Saturday.

NCP’s Ajit Pawar was sworn-in as the deputy chief minister.

BJP has xclaimed that Fadnavis has the support of 170 MLAs and he would prove his majority on the floor of the House.