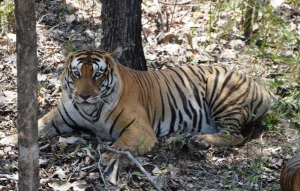 One salutes the indefatigable spirit of T3-the tiger, who has become a mascot for the ambitious Panna Tiger Reintroduction
Project being carried out to repopulate the Panna Tiger Reserve with Tigers. This project was taken up since not a single big cat was left in this habitat in 2009.

T3 is a true hero…. he sent a clear message to everybody when he left the Panna Park area and wandered across three districts and traveled more than 400 kilometers crossing villages and even a town as if trying to return to Pench Tiger Reserve–his original home and abode from where he had been brought to Panna. The message from T3 is loud and clear…”save the buffer areas and corridors…keep them free of poachers and the villagers who poison the waterholes, destroy the salt licks and set up snares and hook up naked wires on high-tension electricity lines to kill wildlife. When caught, they pop up the excuse that they do this to protect their crops (on land which was earlier a forest but progressively has been encroached by the unscrupulous people).”

Unfortunately, the politics of populism has allowed the population to multiply in geometric progression and this is a huge problem we are encountering in India. The population growth rate of the Central Indian State of Madhya Pradesh is higher
than the national growth rate. This despite the fact that mortality rate in the State is also much higher than that of the corresponding figure of the country.

According to one of the latest sample registration system, Madhya Pradesh recorded an average total fertility rate (TFR) of 3.2., which is much higher than the national average. The total fertility rate (TFR) was highest with 6.6 per woman in Chhatarpur, followed by Tikamgarh and neighbouring Panna district with 6.1 and 5.9 children per woman respectively. A large number of these women are tribals. They belong to that section of the population that is most deprived in terms of per capita income, education, basic amenities and human resource development. These people are still in the gathering (minor forest produce collection) and foraging stage. Whatever rudimentary agriculture practices they follow, it is largely on land that is being encroached generation after generation. This is done by clear-felling and setting the forests on fire……the devastation as a consequence adds to the massive change in land use one is witnessing due to mining and other development related activities.

Today we are at the cross-roads. We are also carrying the burden of the Forest Rights Act 2006 [Scheduled Tribes and Other Traditional Forest Dwellers (Recognition of Forest Rights) Act]. During the formulation of the Bill ahead of the enactment at the behest of the Manmohan Singh led UPA-1 Government at the Centre, the Union Ministry of Environment and Forests had taken a strong posture against the Bill. The MoEF had then said that the approach adopted in the proposed Bill would lead to irreparable ecological damage of immense proportion. Decimation of forests as a result of enactment of the proposed Act, was also likely to lead to more frequent and intense natural calamities like floods and soil erosion that would adversely be affecting the livelihood of people. The MoEF had issued the warning that “the enactment of the proposed Bill would also leave an adverse impact on the precious biological diversity, wildlife and the natural resource base for maintenance of carbon, nitrogen and oxygen cycles.” While recognising the traditional rights of tribals over their “ancestral domain”, the MoEF had said
that the Bill was likely to cause more damage, without significant benefit to the tribals in the long run. MoEF even had emphasized that the Forests are a “national natural resource and hence the whole population of the country enjoys rights over
this natural resource either in tangible terms or intangible terms”. Therefore it is the duty of every citizen to protect the forests and environment as per the Directive principles laid down in the Constitution, the MoEF said while taking the stand that the whole issue should be looked at from perspectives of ecological science, equity and overall costs to the entire society.

Before we reach a point of no return…there is need for a post-mortem of all that we have already destroyed. It will help in charting a course which is greener, ecology friendly, conservation oriented and sustainable from the point of view of forests and wildlife, biodiversity, water table and survival of humankind. the Tiger Reserves or the protected areas that we have created will be like bowls or oasis in a vast desert if we do not mend our ways and take remedial measures on a war footing. The alarm bells are ringing loud. For those who care, these bells have started ringing at ear-splitting and sharply rising decibel. It is high time the politicians see the writing on the wall.

When the culture, value system and traditions of a society or a religious group get trampled upon or come under attack, the Marxists, so-called liberals and those who have flourished under the Congress eco-system for so many years, always maintain a deafening and eerie silence but when anyone comes forward and hits the nail on…

Newsroom24x7 Network Hyderabad: The Hanuman bhakts or the devotees of Lord Hanuman were brutally beaten and arrested by Police on Tuesday 7 September 2021 as they protested under the banner of Vishwa Hindu Parishad and Bajrang Dal against what they have described as demolition of the Shri Hanuman Temple at Jubilee Hills in Hyderabad. About…