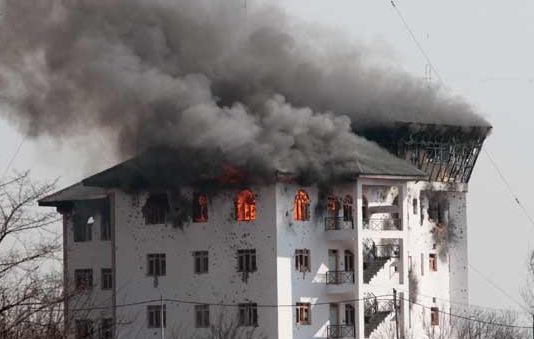 One only has to go through the annual “Country Reports on Terrorism 2019” detailing key developments in 2019 in the global fight against ISIS, al-Qa’ida, and other international terrorist groups to understand the challenges being faced by the Modi Government in India when it comes to combating terror in a scenario that’s been vastly complicated this year by COVID-19 and its adverse impact on the normal life of the citizens and national economy besides the threat posed by expansionist China.

Produced below is a gist of the situation on the terrorism front vis-a-vis India as underscored by the Country Reports on Terrorism 2019 released by the US State Department in the last week of June 2020:

Country Reports on Terrorism 2019, released by the US State Department on 24 June 2020

A February 14 (2019) suicide bombing attack against an Indian paramilitary convoy in the Indian state of Jammu and Kashmir led to military hostilities and heightened tensions between India and Pakistan.

Although ISIS lost the last remnants of its territory in Syria in March, it announced new branches in Pakistan and India in May and claimed responsibility for the Easter bombings in Sri Lanka in April.

Although al-Qa’ida in Afghanistan and Pakistan has been seriously degraded, key figures among AQ’s global leadership, as well as its regional affiliate al-Qa’ida in the Indian Subcontinent (AQIS), continued to operate from remote locations in the region that historically served as safe havens.

Pakistan
Although Pakistan’s National Action Plan calls to “ensure that no armed militias are allowed to function in the country,” several terrorist groups that focus on attacks outside the country continued to operate from Pakistani soil in 2019, including the Haqqani Network, Lashkar-e-Tayyiba, and Jaish-e-Mohammed. The government and military acted inconsistently with respect to terrorist safe havens throughout the country. Authorities did not take sufficient action to stop certain terrorist groups and individuals from openly operating in the country.
Pakistan took modest steps in 2019 to counter terror financing and restrain India-focused militant groups from conducting large-scale attacks following the February (2019) attack on a security convoy in the Indian state of Jammu and Kashmir linked to Pakistan-based Jaish-e-Mohammed (JeM).

Pakistan remained a safe harbor for other regionally focused terrorist groups. It allowed groups targeting Afghanistan, including the Afghan Taliban and affiliated HQN, as well as groups targeting India, including LeT and its affiliated front organizations, and Jaish-e-Mohammed (JeM), to operate from its territory. It did not take action against other known terrorists such as JeM founder and UN-designated terrorist Masood Azhar and 2008 Mumbai attack “project manager” Sajid Mir, both of whom are believed to remain free in Pakistan. [Pakistan made some progress toward meeting the Action Plan requirements for the FATF, allowing it to avoid being blacklisted, but did not complete all Action Plan items in 2019.]

In August, India amended the Unlawful Activities Prevention Act of 1967 to authorize the designation of individuals as terrorists – which it did a month later by designating four terrorists, including
the leaders of LeT and JeM. The Indian Parliament also amended the National Investigation Agency (NIA) Act of 2008 to provide the NIA the ability to investigate terrorism cases overseas. The United States continues to build its strategic partnership with the Government of India, including through the bilateral Counterterrorism Joint Working Group meeting in March and the second 2+2 Ministerial Dialogue in December.

Afghanistan
Afghanistan continued to experience aggressive and coordinated terrorist attacks by ISIS’s branch in the region, ISIS Khorasan Province (ISIS-K), and by the Afghan Taliban, including the affiliated Haqqani Network (HQN).

Terrorist and insurgent groups exploit Afghanistan’s ungoverned spaces, including the border region of Afghanistan and Pakistan. Islamic State’s Khorasan Province (ISIS-K), elements of al-Qa’ida, including affiliate al-Qa’ida in the Indian Subcontinent (AQIS), and terrorist groups targeting Pakistan, such as Tehrik-e-Taliban Pakistan, continued to use the Afghanistan-Pakistan border region as a safe haven.

Terrorist Groups
The Indian Mujahedeen (IM) was designated as a “Foreign Terrorist Organization” (FTO) on September 19, 2011. The India-based terrorist group is responsible for dozens of bomb attacks throughout India since 2005 and has caused the deaths of hundreds of civilians. IM maintains ties to other terrorist entities including ISIS and Pakistan-based Lashkar e-Tayyiba, Jaish-e-Mohammed, and Harakat ul-Jihad Islami. IM’s stated goal is to carry out terrorist actions against Indians for their oppression of Muslims.

Al-Qa’ida in the Indian Subcontinent (AQIS) was designated as an FTO on July 1, 2016. Established in 2014, AQIS focuses on terrorist activity in Afghanistan, Bangladesh, India, and Pakistan. Its leader is Asim Umar, a former member of the FTO Harakat ul-Mujahideen. In September 2019, the Afghan government reported that Umar was killed in a military raid on a Taliban compound in Helmand Province, Afghanistan.

Designated as an FTO on August 6, 2010, Harakat-ul Jihad Islami (HUJI) was formed in 1980 in Afghanistan to fight against the former Soviet Union. Following the Soviet withdrawal from Afghanistan in 1989, the group redirected its efforts towards India. HUJI seeks the annexation of the Indian state of Jammu and Kashmir into Pakistan and the expulsion of Coalition Forces from Afghanistan, and has supplied fighters to the Taliban in Afghanistan.

HUJI claimed responsibility for the September 7, 2011, bombing of the New Delhi High Court, which left at least 11 dead and an estimated 76 wounded. The group sent an email to the press stating that the bomb was intended to force India to repeal a death sentence of a HUJI member. HUJI did not claim responsibility for any attacks in 2019.

Designated as an FTO on October 8, 1997, Harakat ul-Mujahideen (HUM) seeks the annexation of the Jammu and Kashmir into Pakistan and the expulsion of Coalition Forces from Afghanistan. In January 2005, HUM’s long-time leader Fazlur Rehman Khalil stepped down and was replaced by Dr. Badr Munir. HUM operated terrorist training camps in eastern Afghanistan until Coalition air strikes destroyed them in 2001. In 2003, HUM began using the name Jamiat ul-Ansar; Pakistan banned the group in November 2003.
HUM has conducted numerous operations against Indian troops and civilian targets in the Indian state of Jammu and Kashmir, as well as in India’s northeastern states. In December 1999, HUM hijacked an Indian airliner, which led to the release of Masood Azhar, an important leader who later founded Jaish-e-Mohammed (JeM). India also released Ahmed Omar Sheikh as a result of the hijacking. Sheikh was later convicted of the 2002 abduction and murder of U.S. journalist Daniel Pearl.