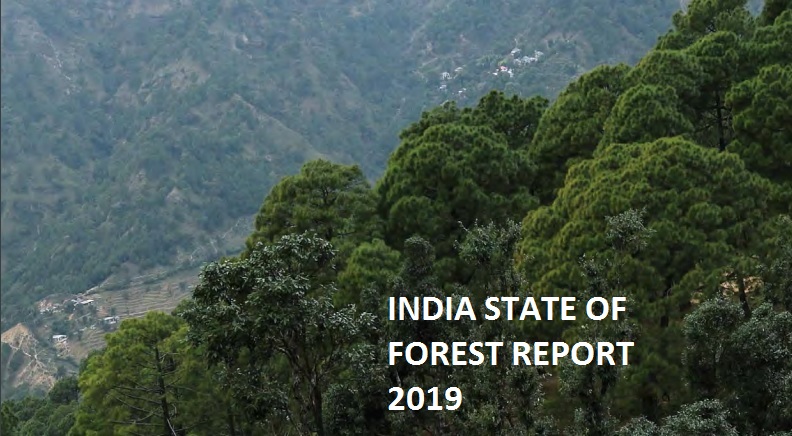 Total Forest and Tree Cover rises to 24.56 percent of the total geographical area of the Country

Union Minister for Environment, Forest and Climate Change Prakash Javadekar on Monday, 30 December, released the biennial “India State of Forest Report (ISFR) 2019”. The report is published by the Forest Survey of India (FSI) which has been mandated to assess the forest and tree resources of the country including wall-to-wall forest cover mapping in a biennial cycle. Starting 1987, 16 assessment have been completed so far. ISFR 2019 is the 16th report in the series.

Total forest cover in India is 21.67 per cent of the geographical area. Madhya Pradesh has the largest forest cover in the country followed by Arunachal Pradesh, Chhattisgarh, Odisha and Maharashtra.

The total forest cover in the tribal districts is 4,22,351 sq km, which is 37.54% of the geographical area of these districts. What is alarming is that the current assessment shows a decrease of 741 sq km of forest cover within the RFA/GW (recorded forest area or green wash) in the tribal districts but at the same time it is also encouraging to note that there has been an increase of 1,922 sq km outside.

It has been assessed that the annual removal of the small timber by the people living in forest fringe villages is nearly 7% of the average annual yield of forests in the country.

Total forest cover in the North Eastern region is 1,70,541 sq km, which is 65.05% of its geographical area. The current assessment shows a decrease of forest cover to the extent of 765 sq km (0.45%) in the region. Except Assam and Tripura, all the States in the region show decrease in forest cover.

Dependence of fuelwood on forests is highest in the State of Maharashtra, whereas, for fodder, small timber and bamboo, dependence is highest in Madhya Pradesh.

The quantity of removal of fodder, in terms of total removal, is estimated highest for Madhya Pradesh followed by Maharashtra and Gujarat.

The total removal of bamboo from forest, by the people living in FFVs is estimated highest for Madhya Pradesh followed by Chhattisgarh and Gujarat.

Fire prone forest areas of different severity classes have been mapped based on the frequency of forest fires. The analysis reveals that 21.40% of the forest cover of the country is highly to extremely fire prone.