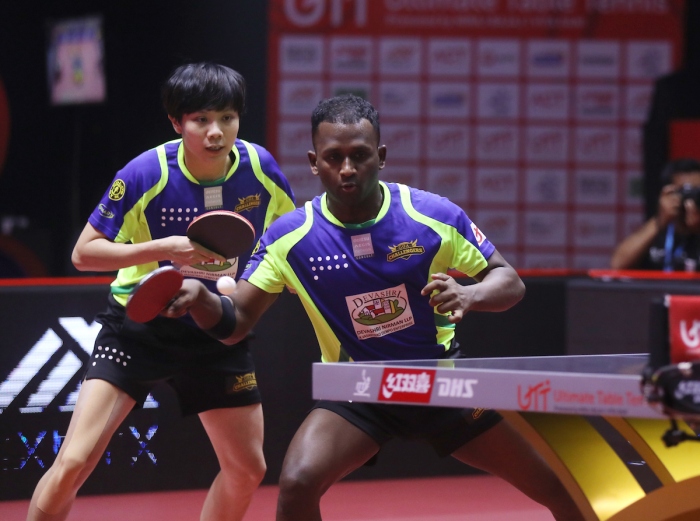 The Challengers in the process  joined  U Mumba, Dabang Delhi and Chennai Lions in the semifinals.

I-Ching and Amalraj romped home in their Singles matches and also successfully paired up in the Mixed Doubles to garner 8 mega points for Goa. Spain’s Alvaro Robles and India’s Archana Kamath collected 1 and 2 points each to make it a grand victory.

World No. 9 Cheng I-Ching  opened  Goa’s campaign , rattling Ayhika Mukherjee of Paltan with her array of big shots. Ayhika defended smartly in the first set but couldn’t sustain the fight beyond the halfway stage. From 6-6, she capitulated to an 8-11 defeat.

I-Ching got a grip on her game by then, and bounced away to a 6-0 lead. She conceded only one point thereafter to make it a walk in the park. She was equally dominant in the third, wrapping it 11-5 to give the Challengers the perfect start.

Alvaro Robles, however, couldn’t contain Chuang Chih-Yuan in the Men’s Singles, allowing Paltan to keep their heads above water. He stayed abreast of Chih-Yuan till 9-9 but gave away the next two points to go down 9-11.  He was up for the fight in the second set, though, countering the World No. 36 with his own brand of shots. It fetched him the desired result and a crucial 1 point for his team. The third set, however, proved to be beyond him, as Chih-Yuan broke away at 6-4 to wrap it 11-5.

I-Ching then returned to pair up with Amalraj in the Mixed Doubles, looking to seal Goa’s place in the semis. They fell behind 0-5 quickly but had the temperament to recover and make it 6-6. They simply walked away from there to win the first set 11-7.

The second, ironically, saw an exactly opposite story. I-Ching and Amalraj created a 4-point lead at 7-3, only to see the Paltan pair of Chih-Yuan-Ayhika catch up with them. They lost it 9-11. The Goan pair cut down their mistakes in the third to clinch it 11-7.

In the reverse Men’s Singles, Amalraj got the better of Harmeet Desai 3-0. It proved to be a surprisingly one-sided contest, with Amalraj racing away to a 11-7, 11-7 win the first two sets. The third was closer, with Harmeet even sniffing a win at 10-8. But Amalraj clinched the next 3 points for a satisfying win. In the reverse Women’s Singles, Archana Kamath overcame Sabine Winter, prevailing losing 8-11,11-6, 11-9.