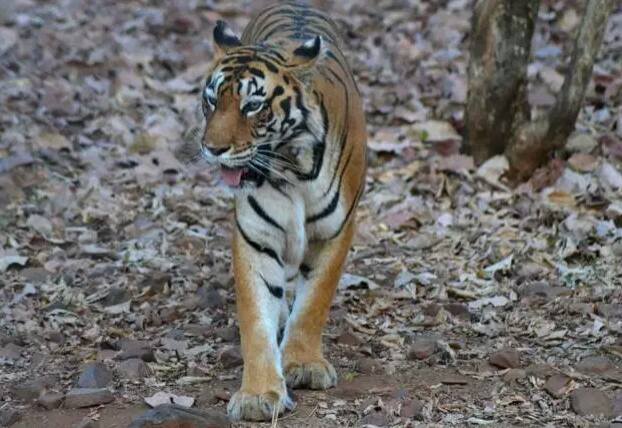 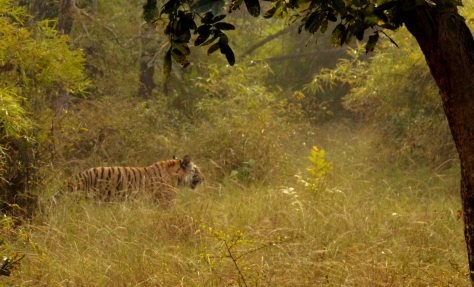 Today the magnificent tiger occupies a precarious and vulnerable position in the biotic pyramid. It is a symbol of the delicate symbiotic relationship between different parts of the ecosystem. The tiger population and its well being can be seen as the most important indicator of the health of the ecosystem and a measure of our success as stewards of earth and nature.

We should not lose track of the importance of each and every link in the vital ecological chain because once the chain gets broken, it is bound to trigger grave after-effects. The unfortunate part of the Tiger story is that the Trustees of nature – those holding executive authority – invariably end up extending lip service when it comes to protecting the ecological chain. The ground reality is rather dismal since the politicians and those responsible for protecting the forests and wildlife more often than not end up turning a Nelson’s eye or they even at times become part of the whole nexus engaged in looting the forests and other natural resources.

Our forest cover – more particularly in the Indian context the Tiger habitat – has been shrinking at an alarming pace. The human pressure on forests is immense due to rapidly increasing population. The situation gets aggravated by the unhindered destruction of green cover by the timber mafia, encroachers as well as large-scale mining activity, grazing and the minor forest produce and firewood collection exercise.

The rapid pace at which the green cover has shrunk in Madhya Pradesh since Independence is a matter of serious concern. If things are allowed to drift, the situation might become irreversible in future.

The tiger, out of the woods, is easily slain; the wood also, that is without a tiger, is easily cut down. Therefore, it is the tiger that protects the forest and the forest that shelters the tiger.

The basic issue confronting us today is how to halt the rate of destruction and disintegration of habitat, green cover, and ecological systems. The biggest problem is linked to the firewood and timber requirements of the ever-increasing human population from the ever-dwindling forests.

Only by addressing these issues on priority, the phenomenon of Global warming would get arrested, the ozone layer would he protected, there would be less harmful radiation and the Earth would become a better place for the coming generations.

Forest and wildlife experts share the view and have been expressing concern over a long period regarding threats to the tiger habitat, which is shrinking and declining at a rapid pace. They are constantly emphasising the need for introspection to review the outcome of what has been done in the last two or three decades for protection of tigers and want to go for a correction course before it is too late.

The Satpura landscape in the North and South of the Narmada River—starting from Anuppur district in eastern Madhya Pradesh and stretching across Dindori, Mandla, Balaghat, Hoshangabad, parts of Narsinghpur, and Sehore—has three magnificent Tiger Reserves. They are Kanha, Pench and the Satpura National Park.

An analysis of the State of Forest Report regularly brought out by the Forest Survey of India, would show that every passing report is a reminder that our forest resources are going down on each and every count – whether we talk of growing stock, density, site quality, distribution of age, current annual increment, mean annual increment, status of regeneration and susceptibility to biotic pressure. The situation gets compounded by population which is exploding at an exponential rate.

There are 8000 forest beats in Madhya Pradesh and 20 per cent of these are positive for occurrence of tigers. For protection of tigers, the entry and exit in National Parks and Sanctuaries should be regulated and the movement inside the Protected Areas should be minimised because it is difficult to differentiate between a genuine resident and a criminal inside a protected area. Even tourism has to be restricted on the basis of the carrying capacity of PAs because these are meant for wildlife protection and tourism is incidental. Tourism cannot be the prime reason for management of protected areas.

The concerns and threats notwisthstanding, the habitat of central India is still very good for the perpetual survival of tigers in this subcontinent. At the same time,increasing biotic pressure is an issue that has to be kept in focus since human pressure vis-a-vis the growing demand for natural resources has put a question mark on the survival of tigers.
The population density 20 years ago was about 140 persons per square kilometre in central India. Now it has increased to more than 180 persons per sq. Km.

Increasing poaching activity because of the international mafia is also hreatening the survival of tigers. The local Pardhi community, whose technical knowhow is excellent with respect to wildlife craft, is being used by the mafia engaged in the illegal trade of tiger body parts. One of the important action points should be to wean away the Pardhis from this mafia.

With the enactment of the Forest Rights Act [The Scheduled Tribes and Other Traditional Forest Dwellers (Recognition of Forest Rights) Act, 2006], about 1.91 crore Acres of forest land has been distributed among the Scheduled Tribes and other forest dwellers. According to the Yield Table each Acre of forest land had about 35 to 40 trees, depending upon the Site Quality.

The WLPA is a central Act and have over-ridding effect on all state Acts. The Article-251 and 254 of the Constitution provides that State Assemblies and State Governments cannot take any decision contradicting Central Acts, including Indian Forest Act,1927; Wildlife (Protection) Act,1972 and Forest Conservation Act,1980. If they take any decision in contravention of Central Acts, such decisions would become null and void ab initio.

After transfer of the subjects of “forests and wildlife” vide the 42nd Constitution Amendment Act, 1976; the State Governments are hot having Sovereign powers on these subjects.

The wildlife conservation revolves around the Chief Wildlife Warden (CWLW). The CWLW is appointed under Section 4 of the WLPA. The CWLW has been empowered with wide ranging and well-defined powers, duties and responsibilities.

Given the mandate under the law of the land, the CWLW must be well-versed with two specialised functional areas – wildlife law and technical wildlife knowledge and competence for technical management of species and the habitat covering Ethology of Animal Behaviour, Wildlife Ecology, Limnology and Marine Biology, Genetics and Breeding Techniques, Evolution including Migration and Dispersal of species, Wildlife Physiology, Cell Biology, Serology, Forensic Biology, Population Pyramid Studies, Landscape planning to cope-up porosity and fragmentation, undetstanding of Zone of Influence, knowledge of Animal Classification to increase understanding of WLPA.

That CWLWs are empowered under Section 29 of WLPA to take cognizance of the destruction of wildlife habitat and regulate the inflow/outflow of water into and outflow to PAs.

The Section-27 and 28 provides for regulation of entry, registration of arm licences and innoculation of cattles to ward off diseases.

The conviction rate of wildlife complaints and challans are less then 2%. Section-58, provides that the “onus of proof” lies on the accused. But this provision has not been used in prosecution.

Anybody can temper the hammer mark placed on the wildlife trophy.

Section-55(c) of WLPA provides that if CWLW or Wildlife Wardens do not take action in wildlife crimes, anybody can provide a notice to CWLW for 60 days under the Wildlife Protection Rules, 1995. And file private complaint with the competent court for initiating the prosecution.

Where lies the problem

Under the pretext of people’s participation, there was a government resolution and executive orders were issued for Joint Forest Management and this turned the tide against the forests in 1980s and 1990s. 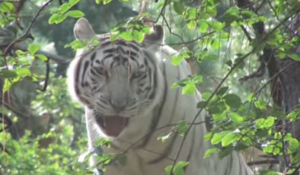 The appearance of White Tiger, Black Panther, White Gaur are all regressive in nature and express “recessive genes” due to shrinking population base, inbreeding and “sexually unviable population” in the absence of proper forest corridors that help in dispersal of species and their migration.

With rapid infrastructure development, our “ecological stability” has been disturbed to a very large extent and within a few years, the situation will be out of control if mitigation measures are not taken on a war footing. The Narmada River has got converted into muddy pools at many places. Tapti and Parvati Rivers have also gone dry. The State of Karnataka is locked in a war for sharing of water with States of Tamil Nadu and Goa.

Sal forests found in 22 States of India – Haryana, Shivaliks, mid-Himalayas, to Trpura and with southern range of Madhya Pradesh, Chattisgarh, Odisha, Jharkhand and West Bengal. These Sal forests are drying, not having regeneration, showing silviculture signs of Senescence leading to extreme adverse effect of “climate change”. The situation has got compounded due to reckless Sal seed collection (to cater to the international demand from the confectionery sector)  and forest forest fire.

¹CREW – Crusade for Revival of Environment and Wildlife

On World Tiger Day, CREW has released a 4-minute educational documentary on Tiger and the Tiger Habitat