Count of Tigers in India rises to 2967; Madhya Pradesh roars the loudest 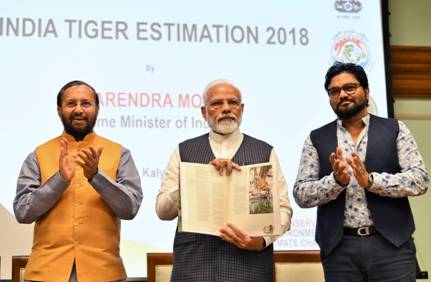 New Delhi:  Prime Minister of India Narendra Modi greeted the citizens by announcing that the count of tigers in India has risen to 2967 in the year 2018.

The Prime Minister marked the International Tiger Day by releasing the results of the fourth cycle of All India Tiger Estimation – 2018, here on Monday 29 July 2019.

Speaking on the occasion, the Prime Minister described this as a historic achievement for India, and reaffirmed India’s commitment towards protecting the tiger. The Prime Minister appreciated the speed and dedication with which various stakeholders worked to achieve this. The Prime Minister said that with almost 3000 tigers, India is today among the biggest and most secure habitats.

Narendra Modi asserted India will build more homes for our citizens and that at the same time create quality habitats for animals. This balance is what will contribute to a strong and inclusive India, the Prime Minister asserted.

The PM said that in the last five years, while work has proceeded at a fast pace for next-generation infrastructure, the forest cover in the country has also grown. There has also been an increase in the “protected areas.” In 2014, there were 692 protected areas, which increased to more than 860 in 2019. The “Community Reserves” have also grown from 43, in 2014, to more than 100 now.

Madhya Pradesh has regained the status of “Tiger State” by registering the highest number of tigers – 526, closely followed by Karnataka – 524, with Uttarakhand at number 3 with 442 tigers.

It is a moment of pride for the country as it achieved its commitment to the St.Petersburg Declaration, of doubling Tiger population, much in advance to the 2022 deadline.

Chhatisgarh and Mizoram saw a decline in their tiger numbers while tiger’s numbers in Odisha remained constant. All other States witnessed a positive trend. Viewed at the landscape level, all 5 landscapes showed an increase with the Central Indian landscape recording the highest increment.

India has been estimating its tigers using a double sampling approach involving a mark-recapture framework to ascertain tiger numbers, which is being improved over time keeping in view advancements made in science.

During the 4th cycle, in sync with Government of India’s “Digital India” initiative, data was collected using an Android based application- M-STrIPES ( Monitoring system for Tigers’ Intensive Protection and Ecological Status) and analyzed on the applications’ desktop module. The, application greatly eased out analysis of a large quantum of data that was collected over nearly 15 months involving survey of 381,400 sq.km. of forested habitats, 522,996 km of walk by State Forest officials, laying of 317,958 habitat plots, totaling a human investment of 5, 93,882 man days. Besides cameras were placed in 26760 locations which gave a total of 35 million images of wildlife including 76523 images of tigers. Segregation of these images was possible in a short time because of use of artificial intelligence software.

The Prime Minister also released report of the 4th cycle of the Management Effectiveness Evaluation of Tiger Reserves (MEETR) with Pench Tiger Reserve, Madhya Pradesh scoring the highest and Sathyamangalam Tiger Reserve, Tamil Nadu showing the highest increment in management since the last cycle for which the latter was awarded. 42% of the tiger reserves fell in the Very Good management category, 34% in the Good category, 24% in the Fair category while no tiger reserve was rated Poor.

Projecting tiger reserve as engines of growth was highlighted in the report released on Economic Valuation of Tiger Reserves which was jointly published by the NTCA and the Indian Institute of Forest Management Bhopal. The Prime Minister also released trailer of the documentary titled “Counting Tigers” to be aired worldwide on August 7.

In conclusion, the Prime Minister called for even greater efforts, towards Tiger Conservation.