Bhopal: Madhya Pradesh Congress Government led by Kamal Nath on Wednesday, 24 July 2019, proved its majority on the floor of the House with 122 MLAs, including 2 from the main opposition BJP, extending support and none to the BJP.

This came as a backhand smash against the BJP barely a few hours after the leader of Opposition in the Assembly Gopal Bhargava had remarked that they wouldn’t take more than 24 hours to topple the kamal Nath Government if they get directives in this regard from the top two leaders of his party. 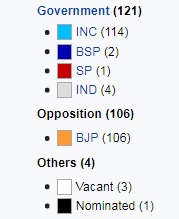