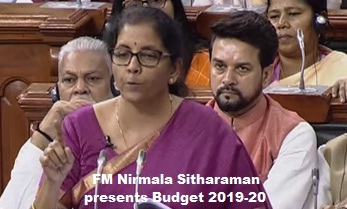 The Chief Economic Advisor (CEA), in the Economic Survey put out a day before the budget, has taken the latest GDP of Rs 1.9 lakh cr with 11% growth as put out by the Controller General of Accounts (CGA)¹ because they were released as late as 31 May 2019. These last set of figures are important because they give a complete picture of the economy and are used for any projections or any future estimates. Using the numbers put out by CGA this time was important because the budget came only in July as against February when the FM does not have a complete picture of the entire year.

Never in the history of Indian budget in the last 70 years has there been a discrepancy in Budget numbers put out by the FM and those put out by her own department. However in the budget of 2020 Finance Minister Nirmala Sitharaman has obviously bungled on all the numbers that she projected to tell the India growth story. What is the mistake? There has been a discrepancy in the GDP numbers taken in the Budget and the figures used in the Economic Survey by the Chief Economic Advisor.

The discrepancy of using the GDP figures taken by FM and those used by CEA project the economy in a different light altogether. The FM has stated that the nominal GDP is at Rs 1.88 lakh cr growing at 12%, while the Economic Survey states the nominal GDP at Rs 1.9 lakh cr growing at 11%. Here is what went wrong and why? The CEA in the Economic Survey put out a day before the budget has taken the latest GDP of Rs 1.9 lakh cr with 11% growth as put out by the CGA because they were released as late as 31 May 2019. These last set of figures are important because they give a complete picture of the economy and are used for any projections or any future estimates. Using the numbers put out by CGA this time was important because the budget came only in July as against February when the FM does not have a complete picture of the entire year.

Why did the FM not use the latest figures? The FM despite having the latest data used outdated interim budget figures of January .When the interim budget was announced by FM in February the growth was looking buoyant at 6.6%. But in the last quarter this shrunk to 5.8% in 2019. The true story of falling growth can be seen in the actual quarterly growth in four quarters of 2019 – Q1 7.7%, Q2 8.2%, Q3 6.6%, Q4 5.8%. This falling picture in the last two quarters pulls down the claims of Acche Din of the Modi govt.

What difference do the two different estimates make to the Budget process? The FM by using a stale data does not want to admit that the economy has grown slowest since 2014 when Modi govt came to power. This despite the Modi government in 2016 changing the methodology of GDP to more current prices. But now a dismal economic picture shows its own govt in a poor light. The FM on the floor of the house claimed that the data used by her in Budget and data used in Economic Survey are not going to make any difference in the future projections. How? In the first place there is a gaping hole in the revenue collections. The Economic survey estimates the tax revenue collection at Rs 15.6 Lakh cr as against the government claim of Rs 17.3 lakh cr. Similarly govt spent Rs 24.6 lakh cr according to the budget, but the economic survey shows govt spending at Rs 23.1 lakh cr. Thus the tax collection and spending have nearly a Rs 2 lakh cr difference between what the FM shows and what the Economic Survey states. The data used by FM as a base will be used for growth in the future as also for various revenue and expenditure. A higher base will mean higher projections but reality in this case is otherwise now. When the FM has lower collections it will have less money for various programs and will have to borrow more thereby adding to the fiscal deficit. Managing the fiscal deficit within the 3% target is a constant bother for the government more so in a falling economy with shrinking incomes.

What is the implication of these differing figures at large? One there has been a continuous tirade by the opposition against the Modi govt that they have been fudging figures to give a false impression of “Acche Din” (good days). In the Budget this doubt has been proved by the FM putting out stale figure to make the growth story look good when the reality is otherwise as projected by Chief Economic Advisor using latest figures. Using differing sets of data gives the impression that the FM is hiding something. Second, this discrepancy of data happens at a time when the FM is trying to roll out a red carpet to the industry as well as foreign investors selling the India growth story. Any investor who is keen to invest will look at details of country’s financial health first. This kind of data distrust will raise the doubts in the minds of investor domestic or foreign. Third, given these projections of an economy that is healthier than actually is a dangerous sign for the govt as it will show projections of greater buoyancy when they are unlikely to be. The targets set by it for the coming year are on an incorrect base whether of revenues, expenses, allotment to various programs etc.In future which is the set of data to be believed if the budget is on stale data? When the lid has blown on discrepancy of data the FM instead of course correction is looking to prove her point. Wonder who is FM trying the hoodwink? It will be for the FM to rise above this mess and present a fresh budget giving out real projection, real targets and real collections? This will be the test of trust of the Modi government. Otherwise the Modi government will prove the skeptics correct. Does it want to?

¹Controller General of Accounts (CGA) is: