Bhopal: Makhanlal Chaturvedi National University of Journalism and Communication (MCUJ) has conducted the entrance examination for different media courses at the Bhopal Campus of the University.

Earlier there used to be a joint entrance exam for admissions in MA level courses that were being offered at Bhopal, Noida and Khandwa.

A total of 346 applications have been received this year for 30 seats in the MA (Mass Communication) course. Hence on an average there are eleven candidates vying for each seat. In comparison, there were only six candidates competing for each of the 60 seats available last year for the same Course. Similarly, for 30 seats in the MA (Journalism) Course, 262 applications have been received this year.  The ratio between applicants and the seats to be filled for the MA (Journalism) Course this year is 8:1. The ratio last year, for 85 seats, was 4:1.

The increase in number of applications received by the university for MA (Mass Communication) and MA (Journalism) shows that these courses are gaining popularity. 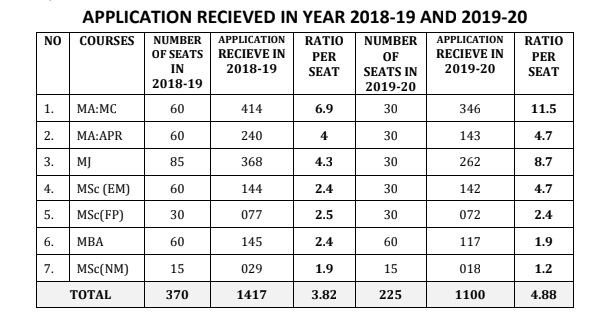 This year, candidates from 16 States are seeking admission in the MCUJ. Forty-five per cent of the applications received this year are from female students, who have shown special interest in Media courses. The new syllabus being introduced this year by the University is based on the University Grants Commission’s Outcome Based Learning Model.

In its three-decade journey, MCUJ has never passed through a more turbulent phase than what has been witnessed during the 10-year tenure of the previous University Vice Chancellor Prof. Brijkishor Kuthalia. He was summarily removed after the recent change of Govenment in Madhya Pradesh

In recent years, an attempt was made to systematically convert the university into a Centre for promotion of a particular ideology and those committed to it were recklessly employed against rules. In the  process, all norms were thrown to the wind. Matters did not end there, frontal organisations linked with the RSS and devoted to just one particular ideology were given hundreds of thousand rupees at the whims of those running the University.

The university has seen many vice-chancellors but the most controversial of them has been Professor Brijkishor Kuthalia. Those in knowledgeable circles are aware of his RSS background.

Immediately after the 2018 Assembly election that led to the formation of the Kamal Nath led Congress Government in Madhya Pradesh, MCUJ became its priority and Deepak Tiwari, who is a senior and highly respected journalist was appointed as the University Vice Chancellor and his immediate mandate is to clean up the mess and elevate the university to a new level.

There is no dearth of charges against Kuthalia. He is accused of squandering university money on alcohol, clearing fake iPhone purchase bills, and purchasing air-travel tickets for his wife through university account when she had accompanied him on foreign jaunts. A complaint in this regard has been lodged with the State Economic offences Wing. About three months ago, the Police have even registered a case against Kuthalia and several others.

Deepak Tiwari, the new Vice Chancellor has taken many crucial decisions to salvage the university’s prestige. He has paid special attention towards revising, updating and improving the course content and the syllabus. It was under his supervision and due to the efforts of a section of the teaching fraternity that the academic standards have been improved drastically to bring it at par with international standards- that too in record time.