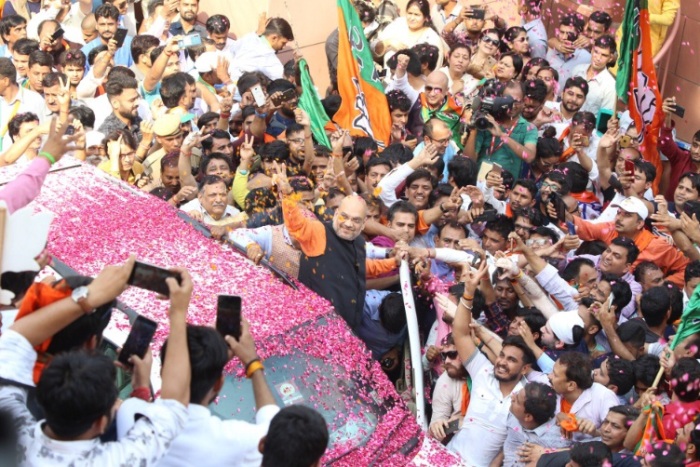 Congress party candidates have been declared elected in 31 constituencies. Congress was leading in 21 and if they are able maintain their lead till the end of counting, their seat tally would go up to 52.

When it was clear this afternoon that the BJP-led NDA has emerged victorious, Modi tweeted:

Together we will build a strong and inclusive India.

Modi further said “The faith placed in our alliance is humbling and gives us strength to work even harder to fulfill people’s aspirations. I salute every BJP Karyakarta for their determination, perseverance & hardwork. They went home to home, elaborating on our development agenda.

Now, the time has come to take the Chowkidar Spirit to the next level.

Keep this spirit alive at every moment and continue working for India’s progress.

The word ‘Chowkidar’ goes from my Twitter name but it remains an integral part of me. Urging you all to do the same too!

The people of India became Chowkidars and rendered great service to the nation. Chowkidar has become a powerful symbol to safeguard India from the evils of casteism, communalism, corruption and cronyism.”

Congratulatory messages are pouring in from world leaders

My friend @narendramodi warm greetings on your impressive election victory! These electoral results again prove your leadership in the world’s largest democracy. Together we will continue to strengthen the close friendship between India and Israel. Excellent, my friend – Benjamin Netanyahu, Prime Minister of Israel.

Congratulations to @narendramodi for winning the legislative elections in #India. The traditional vitality and dynamism of Indian democracy is confirmed. Wishing to the Leader and friend success in his endeavors – Giuseppe Conte, Prime Minister of Italy

Congratulations to @narendramodi on a magnificent victory! We look forward to working closely with you. – Ranil Wickemsinghe, Prime Minister of Sri Lanka

Congratulations on your victory and the peoples re-endorsement of your leadership.
Sri Lanka looks forward to continuing the warm and constructive relationship with India in the future. – Maithripala Sirisena, President of Sri Lanka

My heartfelt congratulations to Prime Minister @narendramodi for his great electoral victory. Together, we will make sure that relations between #Portugal and #India will rise to a new level of friendship and cooperation in the next years. – Antonio Costa, Prime Minister of Portugal

I, on behalf of the people of Bhutan, offer heartiest congratulations to Prime Minister Shri Narendra Modi @PMOIndia and his team on the election victory. As we look forward to working closely in years to come, we pray India achieves greater success under your leadership. Lotay Tshering, Prime Minister of Bhutan

Congratulations to PM @narendramodi on his historic victory in the Indian general elections. It is a strong affirmation of the Indian people’s confidence in the BJP/led government. I look forward to closer and enhanced ties of Maldives-India cooperation. – Ibrahim Mohamed Solih, President of Maldives

Congratulations @narendramodi on your historic re-election as Prime Minister of India. Australia and India enjoy a strong, vibrant and strategic partnership, and our India Economic Strategy will take our ties to a new level. I look forward to meeting again soon. – Scott Morrison, Prime Minister of Australia

Thank you India! Watch from the BJP Headquarters. https://t.co/6WTN8almav

On his victory from Kashi (Varanasi), the Prime Minister’s first reaction was expressed through a tweet. He said: The People of Kashi are remarkable! When I had gone to Kashi to file my nomination papers, they confidently said that they would manage the entire campaign without me having to come back even once…and manage they did! I bow to the citizens of Kashi. Looking forward to serving them.

On May 21, when Modi met the NDA leasders, he said: “Our alliance represents India’s diversity and our agenda is India’s progress. We are best suited to address regional aspirations and enhance national progress.

On May 19, obviously sensing defeat, Rahul Gandhi had cast aspersions on the working of the Election Commission and raised the bogey of electronic voting machines (EVMs) by stating: “From Electoral Bonds & EVMs to manipulating the election schedule, NaMo TV, “Modi’s Army” & now the drama in Kedarnath; the Election Commission’s capitulation before Mr Modi & his gang is obvious to all Indians. The EC used to be feared & respected. Not anymore.”

Rahul was also his sarcastic and caustic best on May 17. When PM Modi sat with party president Amit Shah as he addressed the media at the party headquarters in Delhi, Rahul tweeted: Congratulations Modi Ji. Excellent Press Conference! Showing up is half the battle. Next time Mr Shah may even allow you to answer a couple of questions. Well done!