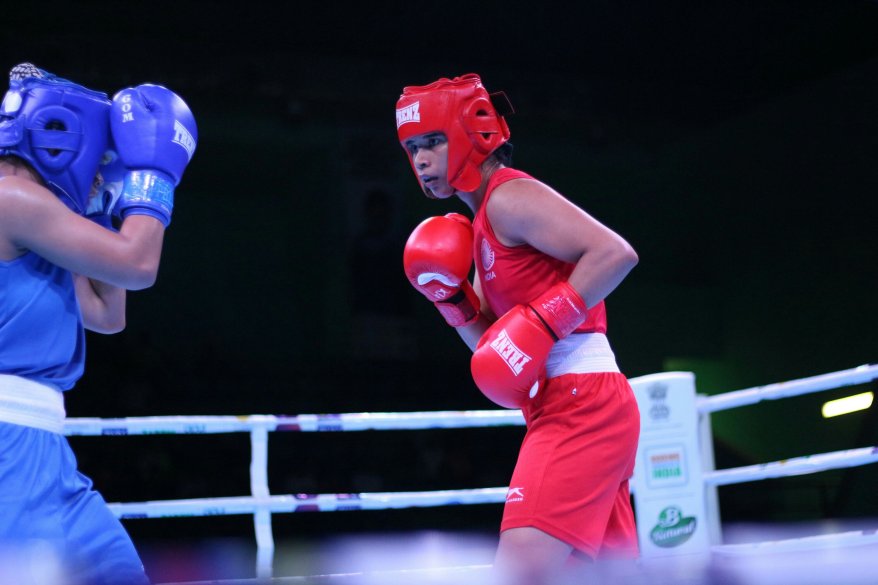 Nepal’s Mala Rai was no match for the London Olympic bronze medallist Mary Kom who wasted no time in progressing into the last-four with a commanding 5-0 win.

Strandja Cup gold medallist Nikhat too was equally impressive with her flurry of punches against compatriot Anamika and registered a comfortable 5-0 victory.

Strandja Cup silver medallist Manju Rani kept attacking her opponent, Cleo Claveras Tesara of Philippines right from the start to earn a win by RSC (Referee Stop Contest) in Round 1 to move into the 48kg semi-finals. Monika was equally dominant in her quarter-final bout with Thailand’s Apaporn Intongsee to earn a 5-0 win.

Kalavani was deemed the winner by RSC in Round 2 over Bhutan’s Tandin Lhamo while Nitu did not enjoy the same fortunes and was blanked 0-5 by former world champion Josie Gabuco of Philippines.

10 Indian boxers had already confirmed medals even before the start of the event with 6 in men and 4 in women being placed in the semi-finals because of the smaller size of the draw.

On the men’s side, Brijesh Yadav and Sanjay are already into the 81kg semi-finals and so are Naman Tanwar and Sanjeet in 91kg and Satish Kumar and Atul Thakur in +91kg. In women’s, Lovlina Borgohain and and Anjali are already assured of medals in 69kg while Bhagyabati Kachari and Saweety Boora are through to the last-four in 75kg by virtue of a first round bye.

Earlier in the day, four Indian men pugilists made it to the quarter-finals. Pawan Kumar made short work of reigning Youth Olympic champion Brian Agustin Arregui of Argentina 4-1 for a place in the 69kg quarter-finals.

Promising Indian boxer Dinesh Dagar, who upset 2012 London Olympic bronze medallist at the GeeBee Boxing tournament recently, continued his fine form to notch up a hard-fought 3-2 victory over Marjon Angcon Pianar of Philippines in the 69kg. In 60kg, Ankit proved too strong for Ryan Boy Empoc Moreno of Philippines whom he blanked 5-0.

In 75kg, Manjeet Panghal got a walkover into the last-eight while Ashish lost 0-5 to Colin Louis Richarno.