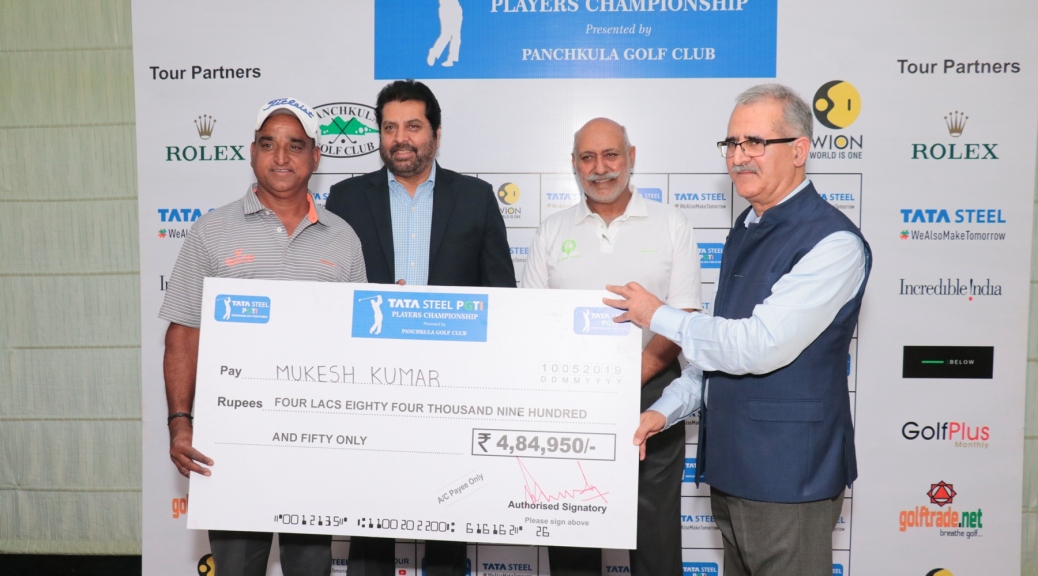 Panchkula: Veteran Mukesh Kumar fired spectacular and error-free last round of seven-under-65 to win the Rs. 30 lakh TATA Steel PGTI Players Championship by one shot with a total of 15-under-273 to claim his record 20th title here on Friday..

The 53-year-old from Mhow, Madhya Pradesh, who has over 100 titles to his credit in a 35-year-long career, claimed a record 20th title on the TATA Steel PGTI on Friday and thus ended a two-year winless streak.

The former Asian Tour winner had secured his last victory at the PGTI Cochin Masters in Kochi in April 2017. It was also Mukesh’s first triumph at the Panchkula Golf Club. His winning cheque worth Rs. 4,84,950 lifted him from 11th to fourth place in the PGTI Order of Merit.

Delhi-based teenager Kshitij Naveed Kaul, a recent winner on the PGTI, fired the tournament’s best round of 64 on Friday to clinch third place at 12-under-276.

Mukesh Kumar, lying overnight tied third and two off the lead, was in the ascendancy from the very start as he scored early birdies on the second, third and fifth courtesy some top-class wedge-play and overtook overnight leader Yashas Chandra of Mysuru.

Kumar, who was playing to a plan of backing his strengths and executing it to perfection, began to truly stamp his authority when he holed his third shot from 100 yards for an eagle on the par-5 seventh. He was then relentless on the back-nine playing two more brilliant wedge shots to set up birdies on the 11th and 15th.

Mukesh managed to keep his nose ahead of a surging Angad Cheema with pars on the last two holes thanks to some accurate ball-striking with his short-irons.

“I planned my round really well today and played within my limitations. I knew I had to be accurate since I don’t have as much distance as the youngsters I was competing with” he said.

“My iron-play was exceptional today and holing out from 100 yards for eagle on the seventh was a huge morale-booster. The birdie on the 15th was the turning point for me as it gave me a comfortable two-shot cushion over Angad Cheema with just three holes to play. I made as many as 17 greens in regulation.

“It’s great to be back among the winners after two years. It’s special to win in Panchkula for the first time and that too in such tough conditions.”

Angad Cheema, who was tied fifth and three off the lead after round three, struggled in the initial stages on Friday as he was one-over through four holes. The 29-year-old Angad, looking to end a five-year winless streak, then made a valiant comeback by sinking eight birdies between the fifth and the 17th with his hot putter giving Mukesh a run for his money.

Cheema, however, missed the decisive 12-foot birdie conversion on the last hole that would’ve tied him with Mukesh and taken the match into a playoff. It turned out to be Angad’s second top-10 of the season and the second-best finish of his career following his win in Sri Lanka in 2013.

Kshitij Naveed Kaul’s red-hot putting form saw him make five birdie conversions from a range of 10 to 35 feet during his last round of 64. He thus climbed eight spots and secured a creditable third place.

Round three leader Yashas Chandra of Mysuru shot a 71 to drop to tied fourth place at 11-under-277.Noida’s Gaurav Pratap Singh (69), the only other player besides Mukesh Kumar to shoot four sub-par rounds this week, also finished tied fourth.