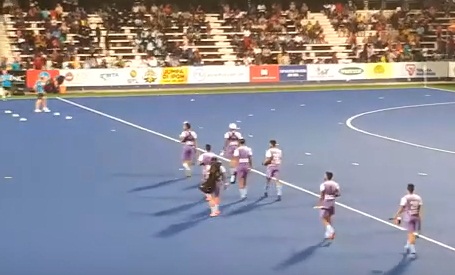 Ipoh (Malaysia) : India flattered to deceive as they squandered the lead  and went down to South Korea  2-4 in penalty shootout after being held 1-1 in the regulation period in the final of Azlan Shah Cup Hockey tournament here on Saturday.

South Korea outplayed World no 5  India with top-class defence as they came from behind to snatch victory and cup.

As the teams were involved in 1-1 deadlock at the end of regulation time, penalty shootout was applied.  Jii Woo Cheon, Lee Jungjun, Jung Manjae and Lee Namyong scored for Korea in the shootout while only Birendra Lakra and Varun Kumar scored for the losers.

The valiant young Indian team which remained unbeaten in the league stage, however fell short in the Final when they could not convert the opportunities created in the striking circle.

Breaching Korea’s razor-sharp defence meant India had to be tactically wise in their attack from the very beginning. Though India made a couple of circle entries in quick-succession early in the game, the Korean defence was too good to crack.

It took accurate, short passes and effective teamwork by forwards Mandeep Singh and Sumit Kumar (Junior) that won India a brilliant opportunity to score in the first quarter. A quick assist by Sumit (Jr) to Simranjeet Singh earned India  the first goal in the 9th minute.

Korea upped their ante as they made two good circle entries but an alert Indian defence kept them from creating potential shots on goal.

With less than a minute remaining for the first hooter, Gurinder Singh earned India’s first penalty corner  but the drag flicker could not get it past the Korean defenders.

In the second quarter, though India made quite a few attempts in the striking circle, there failed to double the lead. With a little over five minutes remaining for the half-time, they earned their second PC but Varun Kumar’s powerful flick was stopped by goalkeeper Jae hyeon.

Three minutes into the second session , Korea won their first PC  but Jang Jonghyun’s flick went far wide  off the target. It didn’t help India’s cause when a good chance to double the lead to 2-0 went begging with a PC execution gone wrong seconds before the end of the third quarter.

Korea upped their attack in the last quarter desperately looking for an equaliser. India were punished when an infringement by defender Amit Rohidas on the baseline trying to tackle Korea Skipper Lee Namyong led to penalty stroke

Jang Jonghyun, who is in good form, made no mistake in sending the ball past  goalkeeper Krishan B Pathak in the 47th minute.

With minutes ticking away, India  tried  hard  for an opening but the Korea defence held strong.

A penalty corner won in the 57th minute by India went amiss with Amit Rohidas’s flick cleared away by the defence. With a 1-1 stalemate in regulation time, the match went into a tense shootout.