Mumbai: Fitch maintains a negative sector outlook on Indian banks, to reflect the ongoing struggle of state banks with weak core capitalisation amid rising macro headwinds and poor profitability. Indian banks need significantly more capital than that the state has earmarked so far, given the size and complexity of the asset-quality problem and weak earnings outlook. Private banks are likely to recover faster than state banks, which shall remain an overhang for the sector.

The rating outlook for most Indian banks mirrors the Stable Outlook on India’s sovereign rating.

The IDRs of all Fitch-rated state-owned banks are driven by sovereign support, while private-
sector banks’ IDRs are governed by their intrinsic profiles, which are expected to remain steady. 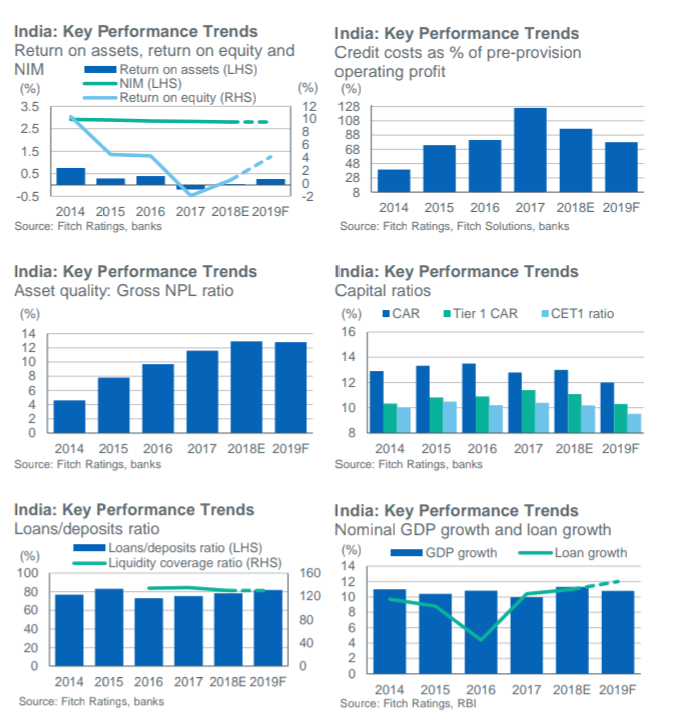 Fitch estimates that Indian banks will need USD38 billion by FY19 to sufficiently meet minimum Basel III capital standards, achieve 65% NPL cover, and leave some surplus capital for growth. It implies that the state will have to inject the USD11 billion it plans to inject by FY19 as well as an additional USD6 billion it had earmarked as fresh equity issuance from state banks by FY19, with support from asset sales or other sources to comply with minimum Basel III norms.

The banks are likely to report weak earnings for (FY19). Some state banks may continue to report losses, albeit slightly better than that seen in FY18. Credit costs have moderated during FY19 but ageing provisions are large enough to absorb the bulk of the weak pre-provision profit.

NIMs are a constraint, as both rising interest rates and a capital shortfall affects loan growth.
NPL to Peak, but Uncertain Recoveries

Fitch expects legacy problem loans to peak in 2019, but the size and complexity of the sector’s
USD140 billion NPL stock will take time to work out. SME and real estate sectors (around 7% of
sector loans) can be a risk for both banks and non-banks in the near-term due to tighter liquidity
and rising interest rates. Non-banks are a risk given reliance on banks for funding (7% of loans).