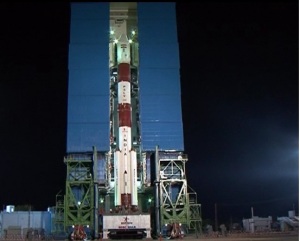 Considering the achievement made by India in the field of Space technology, the best approach for the country is to allow only Indian registered satellite system ie., satellites that are coordinated internationally through the Union Government to operate over India. By adopting such approach, Government requirements for critical sectors like the armed forces as well establishments operated by India based entrepreneurs can flourish in the long run.

Responding to the specific query, ISRO replied with some hesitation that it had only the post of Secretary while other Apex scale posts were approved by the Appointments Committee of the Cabinet as and when required. The organization ducked the question conveniently as to whether the posts are sanctioned or not. Usually up to the level of Joint Secretary, the power to create posts vests in the Finance Minister. Above that it is the Union Cabinet that decides. In the Merit Promotion scheme practiced by both departments, there is a cap at the level of Director. But beyond that, successive Chairmen have created and operated posts with impunity. In fact in every proposal sent by the Department of Space to the DoPT in this regard, the first line has always conveyed the lie that the Department of Space has “two sanctioned Posts in the Apex Scale”.

Take for example the apex post of scientists other than Chairman. ISRO has conveniently lied to the Appointments Committee since a long time that it has sanctioned posts in the apex scale. The beneficiaries of this subterfuge have been many scientists, including Dr Radhakrishnan, Kiran Kumar, and Dr K. Sivan, the present Chairman. By promoting them against a non-existant post, a myth has been created that they are already in the Secretary’s scale and senior to all others and hence only eligible for the Chairman’s post. The government too chose to pass the buck when information was sought from the Cabinet Secretariat in this regard under the RTI Act. How much matters have been complicated can be illustrated by the fact that an honorary advisor to the Chairman was a member of the selection committee for filling the Chairman’s post and nobody saw any conflict of interest in this.

The beneficiary of a badly worded order of the current chairman “stripping” a senior scientist of all responsibilities is the new Satellite Director who is being put in place for the succession battle. The order smacks of manipulation obviously to keep Tapan Mishra out of reckoning for the post of Chairman. Mishra has been shifted from the post of Director Space Applications Centre in Ahmedabad and appointed as advisor in the headquarters.

The game is being played by bringing P Kunhikrishnan, a launch vehicle man, to the U R Rao Satellite Centre (URSC) and then by elevating him to the Apex scale, it will be shown that he is senior to others whereas the fact is to the contrary. The exposure to Launch vehicles is to pad up his CV. This has made the role of the Senior Staff Review Committee, comprising of retired scientists, suspect. Most of the retired scientists lean heavily on the incumbent Chairman for their perks,  travel, honorariums, awards and security at the expense of the tax payers. No wonder such advisory bodies are not independent but mere rubber stamps. It is hoped that the Government will sit up and take note before incalculable harm is done to ISRO. In fact all the Scientists who have been shunted out to innocuous paper pushing posts from the Satellite Center are senior to the new Director. They include the first lady Project Director for satellites.

The other important question relates to transfer of technology and productionisation by the industry for the PSLV project. In his capacity as Chairman, A.S. Kiran Kumar had undertaken the laudable initiative of transferring the entire technology and production to a consortium of Industries that had already made headway in manufacturing components.

Under this scheme only quality, design and mission planning were to remain with ISRO and the first industry manufactured rocket was slated to take off by 2020-21.

As a curtain raiser, the Government had informed Parliament about this plan in July 2016 by stating that “discussions were being held with the Indian industry towards formulating a plan & strategy to enhance the capacity and capability of managing the Polar Satellite Launch Vehicle (PSLV) programme on an end to end basis.” Even the PM had proudly announced this initiative. In the meanwhile, a one time missile man and former head of Brahmos was asked to prepare a report that was accepted by the Government but the present Chairman and his coterie virtually boycotted this committee and with a change of guard the project has been quietly jettisoned and replaced by a plan to make a mini launch vehicle with a dubious market demand.

The Moon man of ISRO, Dr M Annadurai, who has been awarded the Padma Shri, too has made an unsung exit. Dr. Annadurai was Director, URSC from April 01, 2015 to July 31, 2018. Dr Annadurai’s contribution to the realisation of India’s first Lunar Mission, Chandrayaan-1 is exemplary. His other landmark achievement has been the successful Mars Orbiter Mission – that too in record time.

Coming back to aberrations, what is to be noted is that great institutions falter and decline when placed in the hands of incompetent people. It remains to be seen whether or not the Government and the PMO will see the writing on the wall.

The other problem that ISRO faces is vested interests in Delhi who are trying to push an open sky policy for Satellites. There is a particular Broadband forum which has the ears of senior bureaucrats in DOT and is constantly at work to achieve their goals. These interests represent foreign entities in disguise. A large number of satellites (in several bands like Ka, Ku, C etc) are operating over India for which orbit-spectrum rights were obtained by different countries through International Telecommunications Union (ITU) mechanism on first-cum-first-served basis. Rights obtained in such a manner by foreign nations are channeled through private commercial entities to operate over India.

If the Indian government permits commercial satellites acquired through a foreign country to operate over India, it will lead to curtailing India’s ability to acquire new orbit-spectrum/orbital slot. The rights that India possibly would lose in this process will be for a period of 30 to 40 years and even beyond.

It may also be noted that allowing foreign satellites through open-sky approach to service over India will also result in severe bottlenecks for the government when it comes to using satellites for armed forces in the days to come. Ability of any future coordination by India for any civilian satellite mission and to incubate an Indian company to operate satellite will become extremely difficult and even if it is feasible, Indian companies will have to pay a heavy price for operating over India as compared to any foreign registered satellite. Neighbouring countries like China closely guard landing rights over their territories and do not permit any foreign satellite to operate over their territory. Many Hong Kong registered Chinese satellites also beam over India.

Advanced countries like the US, Russia, and China are amassing orbit-spectrum resources through international coordination process for the government and private use whereas India will not be able to compete with such nations commercially. If open-sky policy is encouraged and if the current trend is allowed to continue, India will not be able to meet the requirements of a critical sector like Defence in spite of substantial technological achievement in launching and building satellites.

Considering the achievement made by India in the field of Space technology, the best approach for the country is to allow only Indian registered satellite system ie., satellites that are coordinated internationally through the Union Government to operate over India. By adopting such approach, Government requirements for critical sectors like the armed forces as well establishments operated by India based entrepreneurs can flourish in the long run. Finally, considering the neighborhood of India, it is advisable not to adopt the open-sky approach. In fact no country allows this over their territory.

Capacity shortage is touted as one of the reasons for open skies but even if it is announced, what cannot be overlooked is that neither satellites nor orbital slots are available off  the shelf. It will take at least a decade before any worthwhile accretion to capacity will take place. If ISRO follows its own road map, it will be able to offer surplus capacity in communication satellites in a few years. Besides only so long as a Nation takes care of its own technology needs, will R & D prosper and progress. The best way to kill ISRO is open it up to foreigners, which is what some vested interests are doing. Whether the current ISRO management can rise to the challenge is to be seen.

To sum up, the Government has committed a blunder in not extending Kiran Kumar’s tenure and doing a wider search for a successor. The excessive hurry in this matter, it appears, was to keep a major contender out of reckoning and to promote a rank junior so that he could be within sniffing distance of the Chairman’s post when it falls vacant the next time. The government would do well to split the post of Secretary Department of Space and Chairman ISRO between a bureaucrat and a scientist to prevent concentration and misuse of power.