Tiger out of the woods, is easily slain; the wood also, that is without a tiger, is easily cut down. Therefore, it is the tiger that protects the forest and the forest that shelters the tiger.” – Mahabharata

Contrary to the letter and spirit of the law of nature depicting the symbiotoc relationship between forest and the tiger spelled out so succinctly in the Mahabharata, we have a situation where about 19 million acres of forest land has been distributed in a short time under the Scheduled Tribes and Other Traditional Forest Dwellers (Recognition of Forest Rights) Act, 2006, also called the Forest Rights Act, that provides for giving forest rights across India, including both individual rights to cultivated land in forestland and community rights over common property resources to tribals and other forest dwellers. One can imagine the magnitude of the crisis and the havoc caused to our forest wealth following the enactment of the Forest Rights Act by appreciating that each acre of forest land that has been parcelled out to the people, on an average, had about 35 to 40 trees, of course depending upon the site quality.

It is a pity and a shame for humanity – the way the tiger population has dwindled over the years. All are aware how poachers keep striking at will. The tiger habitat has been methodically encroached – an activity diabolically supported by politicians to win votes and stay riveted to power. Whatever remains of the tiger habitat is being plundered by the mining mafia and illegal fellers or else the so-called stakeholders who are robbing the forests and the entire biodiversity base through reckless grazing and minor forest produce collection. Let us go back a few years. By 2009, the last of the Panna tigers had vanished. It is an entirely a different matter that after a few years of relocating and breeding under controlled conditions, the Panna Tiger Reserve is again boasting of tiger numbers. There is no reason to be proud of Panna re-population progrmme because the idea is not to breed tigers under controlled conditions but to ensure the forests and their corridors are protected to such an extent that there is minimum man-animal conflict and tigers are left with the necessary privacy and prey base to ensure they breed and thrive in their natural surrounding.

School students in Bhopal are coming under the umbrella of Young CREW for Tigers, which is part of the Conservation Awareness Programme launched by CREW, a not-for-profit organisation. CREW is spearheading the programme aimed at building a movement for tiger protection and wildlife conservation. It was an important milestone in this direction when a team of Young CREW for Tigers met Madhya Pradesh Chief Minister Shivraj Singh Chouhan in his official chamber in the state Assembly on March 12, 2013. On this occasion, the children gave the message: “Bagh hai to jungle hai, jungle ha to jal hai, jal hai to jeevan hai.” ( if the tiger is safe, the forest is safe, if the forest is there, there is water and where there is water, there is life). This was greatly appreciated by the Chief Minister. As part of CREW’s partnership with Sanctuary Asia and its Kids for Tigers programme, CREW’s young brigade also presented the Chief Minister a banner with the slogan “Save our Tigers”. 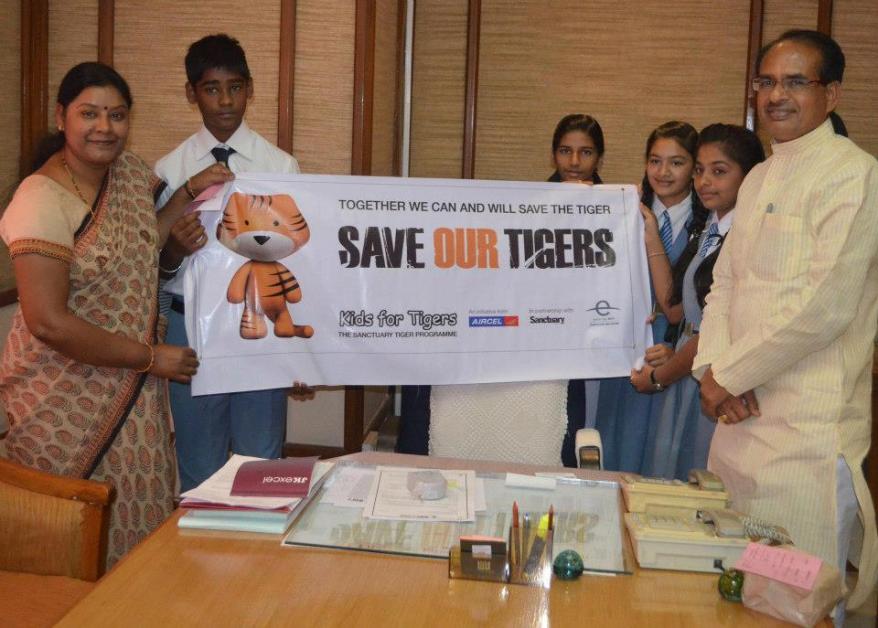 During this meeting, the chief minister had blessed the students emphasising the importance of conservation and sustainable approach towards life. He had also conveyed his best wishes for the success of the Young CREW for Tigers initiative and the Kids for Tigers programme. The children had used this meeting as an opportunity to present to the Chief Minister a poster of Kids for Tigers programme and an illustrated booklet on Pench Tiger Reserve titled “Glory that is Mowgliland“, published by CREW [ Click here for Glory that is Mowgliland in digital format ]

It’s more than just sad the way tigers are perishing or getting killed….I’m horrified by the fact that most of those who can act have abdicated their responsibility….Instead they are busy counting their gains and falling to greater depths on being doled out lavish sinecures and positions that matter. By paying lip service to combat Wildlife crime and by going all out to allow reckless cattle grazing, logging, minor forest produce collection, mining and encroachment of forest land, they are thriving and at the same time driving the last nail in the coffin of this majestic specie.

It is time the world sits straight….the tiger crisis is only drawing lip service…the tiger habitat is not only shrinking…it is being raided day in and day out by tourists besides poachers…what to talk of immense biotic pressure aggravated by population pressure…The forest in the catchment of our rivers are getting denuded at a rapid pace. For example the destruction of forests in the catchment of the Narmada River in Madhya Pradesh has touched alarming levels. Consequently, the rivers and tributaries in this landscape do not remain charged all the year round through the natural process of percolation of rain water and gradual release of water through streams and rivulets. No wonder, the grand Narmada is no longer perennial. As the slopes across the Central Indian highlands are becoming barren, there is too much of silting through runoff that reduces the carrying capacity of our rivers. Hence, when monsoon arrives there are flash floods as too much of water flows into the rivers in too short a time thereby leaving the rivers thin, lean or dry for remaining part of the year.

4 June 2015 was a Black Day for ecology, green cover and forests as on this day the Madhya Pradesh Government issued two extraordinary gazette notifications to bring in force the “Madhya Pradesh Protected Forest Rules, 2015” (Under these rules “Protected area” has the same meaning as assigned to it under The Wildlife Protection Act, 1972) and the “Madhya Pradesh Village Forest Rules, 2015”. These rules will sound the death knell for forests and the already threatened wildlife. [ Check: What will be the state of the forests in Madhya Pradesh after a few years? https://newsroom24x7.com/2015/06/17/what-will-be-the-state-of-the-forests-in-madhya-pradesh-after-a-few-years/ ]

Large-scale land use change has become a common practice leading to massive depletion of forest wealth. In Central Indian landscape that can be called the water capital of this country, the forests that stretch across the undulating slopes and ridges of the Vindhya and Satpura mountain ranges that form a massive watershed and provide the passage to the Narmada river and its tributaries to flow have continued to face immense biotic pressure due to a horde of factors that are not being addressed in totality.

I am not interested in tiger numbers. I am only interested in the safety of tigers in their natural habitat. I am only interested in preserving the core, the buffers and corridors and keeping them free from poachers, illegal mining activity, reckless logging and exploitation of natural resources. The factors threatening the forests are too many. Today the tiger that sits on the apex of the biotic pyramid is gravely threatened. It would be a crime against the most majestic of all species if we remain mute spectators and allow the politicians and their bureaucratic arm to destroy and devastate our forests and wildlife. My heart weeps for the vanishing stripes…….