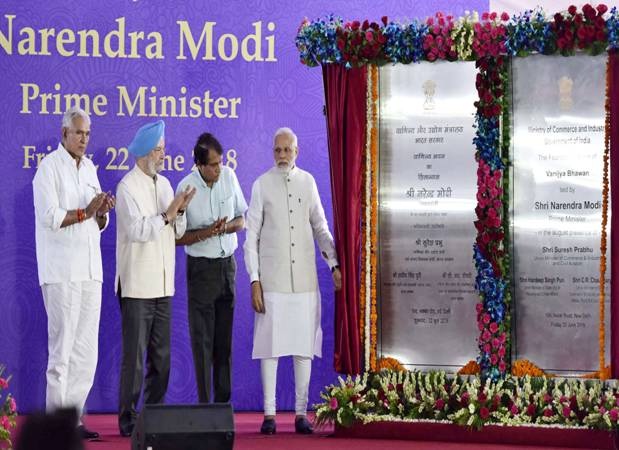 The Prime Minister expressed confidence that the building will be completed well within deadline. He emphasized that this would be in keeping with the spirit of New India, and moving away from old practices, under which important building projects, even in the Capital, had been inordinately delayed. In this context, he mentioned the Dr. Ambedkar International Centre, the Dr. Ambedkar National Memorial, the Pravasi Bharatiya Kendra and the new office building for the Central Information Commission.

Talking of adoption of digital technology, the Prime Minister remarked that the land on which the new building is being constructed, was earlier occupied by the Directorate General of Supplies and Disposal. This has now been replaced by the Government e-Marketplace (GeM), which has seen transactions worth Rs. 8700 crore in a short time, he added. He urged the Department of Commerce to work towards further expansion of GeM, and leverage it for the benefit of the country’s MSME sector. He also spoke of the benefits of GST, and said the Union Government is making constant efforts to create a people-friendly, development-friendly and investment-friendly environment.

The Prime Minister talked of various macro-economic parameters, and other indicators to explain how India is now playing an important role in the global economy. He said India is now among the top five fin-tech countries. He said subjects such as “Ease of Trading,” and “Ease of Doing Business,” are all related to “Ease of Living” in an interconnected world.

The Prime Minister emphasized the need for an increase in exports, and said that States must be made active partners in this effort. He said the Department of Commerce must resolve to raise India’s share in total global exports to at least 3.4 percent, from the current 1.6 percent. Similarly he said, efforts must be made to raise domestic manufacturing output, to reduce imports. In this context, he gave the example of electronics manufacturing. He said the Union Government has taken a number of steps to boost domestic manufacturing. .