As bribery charges fly NHAI and fertilizer business come under scanner; Money laundering not ruled out 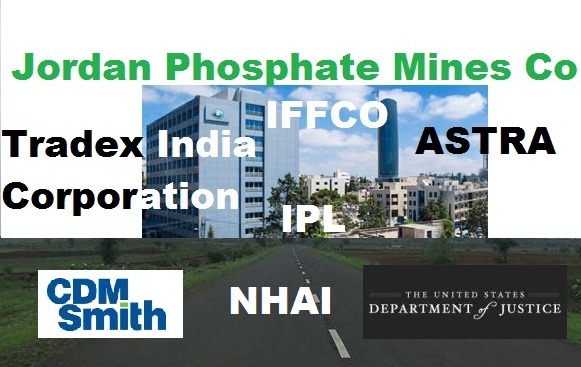 In the second fortnight of June 2017, the US Department of Justice, closed its investigation of CDM Smith Inc. (CDM Smith), disclosing that from approximately 2011 until approximately 2015, CDM Smith and its India division illegally paid massive bribes to officials in the National Highways Authority of India (NHAI) in order to receive contracts from NHAI.

During the closing period that came under investigation by the US Department of Justice, the Chairman of NHAI was Raghav Chandra, a 1982 batch IAS officer borne on the Madhya Pradesh cadre. He headed NHAI under the present NDA Government from 31 August 2015 to 23 November 2016.

Chandra was Joint Secretary (Highways) in the Ministry of Road Transport & Highways from 5 October 2010 to 2 November 2012. Coinciding with this period, in June 2011 the World Bank Integrity report titled “Curbing Fraud, Corruption, and Collusion in the Roads Sector” came out with the damning remarks about corruption in highway projects in India. The World Bank Integrity Vice Presidency (INT) Annual update for 2015 also underscored corruption linked with a $806 million National Highway Project co-financed by the World Bank and the Government of India, in which INT found evidence of bribes, fraudulent reimbursement claims, and diversion of mobilization payments. The WB Report, referring to June 2015, points to fraud in a Road Project and goes on to underscore that INT is unaware of any action by authorities.

In the interregnum, i.e. between the two stints as – Joint Secretary (Highways) and Chairman NHAI, Raghav Chandra held the post of Financial Advisor at the level of Additional Secretary in the Department of Agriculture & Cooperation under the Ministry of Agriculture from 2 November 2012 till 31 August 2015.

During this period, there were developments taking place in Jordan linked to an Indian company owned by a close relative of Chandra. The Amman Criminal Court on 23 July 2013 sentenced the former CEO of the Jordan Phosphate Mines Company (JPMC), Walid Kurdi, in absentia, to 37.5 years imprisonment with hard labour on charges of “abuse of office” and embezzlement. In the later part of 2016 the European Courts acquitted Kurdi, of charges against him that the money in his bank account was the proceeds of criminal activity. It was also held by the European courts that the practices adopted by the former Chairman of the Board of Directors of the JPMC did not amount to crimes of theft, embezzlement or plunder.

The initial charge against Walid Kurdi, was that he had exploited his office by setting up Astra, an intermediary company that bought fertilisers from JPMC at preferential prices and sold the fertilisers to “the Indian buyer” at higher prices, This allegedly made substantial profits to Astra at the expense of JPMC estimated at hundreds of million dollars. Subsequent investigation established that Astra is owned by Tradex. One of the owners and director of this company is Ajay Gupta. Dealings between JPMC and Tradex can be traced back to the nineties. During Kurdi’s prosecution the defence argued that the dealings between Astra and JPMC was in compliance with a request in writing by Indian buyer – Indian Potash Limited.

One of the directors of IPL is Dr. Udai Shanker Awasthi, who has been the Managing Director of Indian Farmers Fertiliser Cooperative Limited (IFFCO) since February 1993. IFFCO, the largest fertilizer and marketing Cooperative in the world, holds majority share in IPL.

The Joint Managing Director and Chief Financial Officer of IFFCO is Rakesh Kapur, an an ex-Indian Revenue Service Officer who this past May got elected as Chairman of International Fertiliser Association. He joined IFFCO as CFO in 2005. His wife, Ms. Anita Kapur, who is presently a Member of Competition Appellate Tribunal, was the Chairman Central Board of Direct Taxes when a file relating to a probe by the Income Tax department into a Rs. 1000 million FDI in favour of the Tradex group was closed. Government of India sources have informed Newsroom24x7 that this case, which allegedly smacks of money laundering, is still under the scanner of the enforcement agencies at the Government of India level.

Postscript (updated – 3 August 2017; 5 p.m.): The Union Minister for Road Transport and Highways and Shipping Nitin Gadkari told Lok Sabha on 3 August 2017 that he has asked NHAI to institute a probe in the wake of disclosures by the US Department of Justice. Still question arises – why no probe was held when the World Bank had pointed to corruption in the National Highway project. Walid Kurdi’s acquittal by European Courts in the Jordan Phosphate case could be based on the logic that there was nothing criminal or illegal in the business procedure adopted by him. But whether or not Walid’s business model was aided and supported by the Indian links of JPMC and others holding positions of authority in India besides the issue of money laundering is a matter that needs to be investigated.