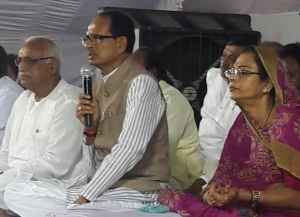 Bhopal: Madhya Pradesh Chief Minister Shivraj Singh Chouhan today ended his indefinite fast, which he began yesterday to restore peace as the farmers’ agitation had turned violent in many parts of the State and 6 persons had died after the Police opened fire on agitating farmers at Pipalia Mandi in Madsaur district on June 6.

Vetaran BJP leader and former State Chief Minister Kailash Joshi ggave coconut water to Chouhan as he broke his fast at Dusshera Maidan here.  After breaking his fast, the Chief Minister collected petitions from the farmers who had come to meet him from various parts the state.

Addressing the gathering, the Chief Minister said that those who have broken peace in the name of farmers have tried to defame the state. He said that no case will be registered against farmers, but such people will not be spared. He said that he will continue to serve the citizens of the state till his last breath. Do not allow anti-social elements to disturb peace, he said and asked the farmers to identify such elements and remain cautious in future. He said that those who have suffered loss of property will also be given relief.

The Chief Minister said that the Madhya Pradesh governent has even gone gone beyond the recommendations of the Swaminathan Commission which was set up in 2006. The Commission had recommended loans to farmers at 4 percent interest rate, wheres the state government was giving them loans at minus 10 per cent for fertilizer and seeds. Loans for farming are being given at zero per cent interest.

The Swaminathan Commission had asked the states to make arrangements for irrigation. Today, 40 lakh hectare agricultural land is irrigated in Madhya Pradesh and water from Narmada is reaching the Malwa region and other areas.

Chouhan said that to eliminate the role of intermediaries, farmers’ markets will be built in all the towns of the state so that farmers can sell their produce directly to the buyers. He also said that state land use counseling service will be started so that farmers get the right advice at the right time about the quantity of crop to be sown. Under n o circumstances, agricultural land will be acquired forcibly for urban projects. Farmers’ opinion is important, he said addind they will be provided free of cost copies of Khasra / Khatouni at their doorstep once a year.

Chauhan said that two lakh “tribal brothers” have been given land rights. There will be no poor without land and a law will be made for this. Today, the agricultural growth rate of Madhya Pradesh is highest in the world. Earlier, the standing crops used to dry up and perish. Madhya Pradesh has been the first State to implement the Prime Minister’s Crop Insurance Scheme. Road network has been expanded for the farmers’s benefit. The farmers were also being given relief without any survey if their soybean crop was getting destroyed.

Chouhan said that many schemes have been made for the farmers’ children, whether they were studying or were self-employed. Earlier, the tahsil was the unit for extending relief but now the farmer is the unit. He said that a Rs. 1000 crore price stabilization fund is being created. Onion is now being purchased at Rs. 8 a kilo. Agricultural Production Cost and Marketing Commission is being set up. He said that urad, tur and moong will purchased at the support price.

Chauhan announced that procurement by the Government will not be done below the minimum support price and buying below the support price will be considered a crime. Responding to another issue raised by the farmers, he said that the best model of milk procurement is that of Amul Dairy. The purchase of milk will be arranged on the same model. There will be a Samadhan Yojna” (scheme for solution) for the defaulting farmers so that they could continue to receive loan.

Chouhan thanked the farmers for withdrawing their agitation and supporting the state government in restoring peace. Assuring them that all their problems will be resolved, he appealed to the farmers to participate in the plantation program on the banks of Narmada on July 2.

Anil Yadav, Vice Chairman of the Madhya Pradesh Farmers’ Union, announced on this occasion that the agitation was being called off as the Chief Minister has accepted all the demands. He said that the Government has accepted the long standing demand to offer the cost of production. This demand has been accepted for the first time since independence.