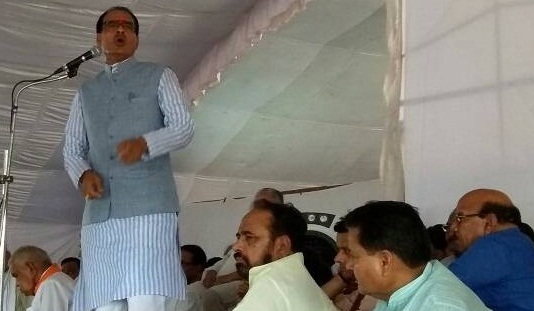 Bhopal: Madhya Pradesh Chief Minister today sat on an indefinite fast in the state capital to douse the fire that has spread across large parts of the State due to the agitation by the farmers, who are demanding rural loan waiver, hike in support price and availability of agricultural inputs at affordable prices.

The chief minister is sitting on fast in the backdrop of massive violence and death of 6 persons in Mandsaur district where the Police had opened fire on 6 June during the farmers’ agitation. At least two major highways – Bhopal-Indore and Mandsaur-Neemuch -were badly affected throughout this week as rioters burnt a large number of vehicles and trucks on these roads. Some districts in Western Madhya Pradesh have been the worst hit by the ongoing riots.

Speaking at Dussehra Maidan in BHEL, the venue of his indefinite fast, the Chief Minister said: “Non-violence is Gandhiji’s principle. I have decided to follow his footstep.”

Chouhan said that children and women are screaming. No civilised society will tolerate such an agitation. Showing special concern for the people, he said: “I’m not a stone-hearted person. If any baton or lathi is raised against the public, then it falls on my back.”

The property that has been burnt (during the ongoing agitation) does not belong to Shivraj Singh Chauhan, the Chief Minister said adding someone from among us has suffered the loss. He further said: “the agitation could be justified if the government was not prepared to listen. I am sitting here to discuss with you. Come let’s talk”.

Chouhan said that he can feel the pain of farmers and genuinely wants to stop the violence. Pointing out that the country and State can’t prosper without the development of farmers, he made an appeal to the people to stop burning up the state.

Raising the important question: “Who is behind the violence? the Chief Minister said that it will be investigated and the culprits will not be spared.

Asserting that all problems can be resolved peacefully, the chief minister urged the 7.5 crore people of Madhya Pradesh to restore peace and not destroy the beautiful state.

Chouhan tried to touch the emotional chord by saying that his life is dedicated to farmers and their well-being was the mission of his life. He said that he would be sitting at Dussehra Maidan to spread love and discuss problems of the people.

In last 11.5 yrs, the Chief Minister said that development has been his main focus and he has worked tirelessly for farmers.