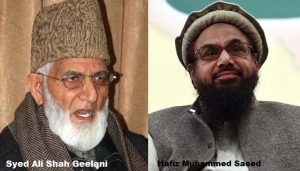 New Delhi: National Investigation Agency has registered a PE (Preliminary Enquiry) into the funding of Hurriyat leaders namely Syed Ali Shah Geelani, Naeem Khan, Farooq Ahmed Dar, Gazi Javed Baba and others in J&K by Hafiz Muhammed Saeed and other Pakistan based terrorists and agencies to carry out subversive activities in Kashmir and for damaging public property, stone pelting on the security forces, burning of schools and other Government establishments.

The NIA has also taken cognizance of the news item related to the recording of
conversations between the reporter and leaders of the separatist groups operating in
Kashmir valley, by India Today TV, on 16 May 2017 in this regard.

On 26 May 2017, National Investigation Agency has registered a case at the NIA Branch Office at Guwahati subsequent to the case registered at Senapati PS on 7 April 2017 on the alleged allegations of recovery of Rs. 18,47,667 from Mrs. Shelly Sumi, wife of Nikki Sumi (SS Lt. Gen. and Deputy Commander-in-chief of the Banner terrorist organisation NSCN-K) and others in district Senapati (Manipur) on 7 April 2017. The money was suspected to be in transit illegally to GHQ Taga, Myanmar, for her husband. Mrs. Shelly Sumi is alleged to be raising funds for terrorist acts by the
NSCN(K).

On 7 April, based on specific intelligence regarding movement of Mrs. Shelly Sumi carrying huge amount of money to Taga (Myanmar) for her husband, a temporary check post was set up on at NH-2 near Karong village, Senapati district, by the 34 Assam Rifles. At about 5.30 in the evenin, one Dimapur to Imphal bound bus bearing registration no. MN-01-2027 was intercepted and four persons were apprehended. They were (i) Ms. Shelly Sumi (ii) Ms. Ikheli Yeptho (iii) Ms. Shutoli (iv) Ms. Hozheli,
all from Nagaland, and the amount of Rs. 18,47,667 was recovered from their possession, besides other articles. A case was registered by the Senapati Police station and the four accused were arrested by the local Police.