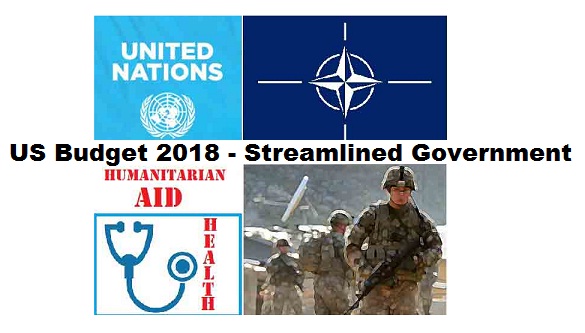 Washington DC: In his first proposed budget, the US President Donald Trump has underscored that through streamlined Government, his Government’s  focus would be on driving an economic boom that raises incomes and expands job opportunities for all Americans.

Faster economic growth, coupled with fiscal restraint, will help in fully funding the national priorities, balance the budget, and start to pay down national debt, Trump has emphasised.

In his Budget message, Trump has stated: “Our moral commitment to replacing our current economic stagnation with faster economic growth rests on the following eight pillars of reform:

Health Reform: We need to enable Americans to buy the healthcare they need at a price they can afford. To this end, we must repeal Obamacare and its burdensome regulations and mandates, and replace it with a framework that restores choice and competition. This will lower the cost of care so that more Americans can get the medical attention they need. Additionally, Medicaid, which
inadequately serves enrollees and taxpayers, must be reformed to allow States to manage their own
programs, with continued financial support from the Federal Government.

Tax Reform and Simplification: We must reduce the tax burden on American workers and businesses, so that we can maximize incomes and economic growth. We must also simplify our tax system, so that individuals and businesses do not waste countless hours and resources simply paying their taxes.

Immigration Reform: We must reform immigration policy so that it serves our national interest. We will adopt commonsense proposals that protect American workers, reduce burdens on taxpayers and public resources, and focus Federal funds on underserved and disadvantaged citizens.

Regulatory Rollback: We must eliminate every outdated, unnecessary, or ineffective Federal
regulation, and move aggressively to build regulatory frameworks that stimulate—rather than stagnate—job creation. Even for those regulations we must leave in place, we must strike every provision that is counterproductive, ineffective, or outdated.

American Energy Development: We must increase development of America’s energy resources, strengthening our national security, lowering the price of electricity and transportation fuels, and driving down the cost of consumer goods so that every American individual and business has more money to save and invest. A consistent, long-term supply of lower-cost American energy brings with it a much larger economy, more jobs, and greater security for the American people.

Welfare Reform: We must reform our welfare system so that it does not discourage able-bodied adults from working, which takes away scarce resources from those in real need. Work must be the center of our social policy.

Education Reform: We need to return decisions regarding education back to the State and local levels, while advancing opportunities for parents and students to choose, from all available options, the school that best fits their needs to learn and succeed.

On This year’s $37.6 billion Budget request for the US State Department and also USAID, the US Secretary State Tillerson said it addresses the challenges to American leadership abroad and the importance of defending our national security interests. It acknowledges that U.S. diplomacy engagement and aid programs must be more efficient and more effective, and that advancing our national security, our economic interests, and our values will remain our primary mission. This budget is responsive to the realities ofthe world in the 21st century, and the need for a State Department that operates with maximum flexibility in an ever-changing international environment. The FY2018 budget supports the President’s commitment to make the U.S. Government leaner and more accountable to the American taxpayer while also maximizing our diplomatic and engagement efforts, including with our international partners, he pointed out.

The Budget, according to Sastry, also recognizes that some of these global challenges cannot be met by U.S. alone, but requires a global effort. So, the US will continue to be the global leader in the critical humanitarian and health areas and will do its fair share but at the same time would be asking others to step up and do more

When attention was drawn by a journalist to part – one of the budget documents which says that PEPFAR (President’s Emergency Plan for AIDS Relief ) would focus on 12 countries instead of 65 countries where it currently operates and asked where are the budget cuts – at PEPFAR and also about significant reductions in U.S. contributions to international organizations.

On PEPFAR, Sastry said: “We are requesting $5 billion for PEPFAR, which is 20 percent of our entire foreign assistance budget, which is actually a little bit higher than what we’ve seen in the years past, but it is a reduction from the $6 billion that we received last year. The PEPFAR reduction – the PEPFAR total will still maintain our contribution to the Global Fund at the two to one ratio that we had – that we have committed to previously, so that is about $1.125 billion of that total. Furthermore, on the bilateral side, this will allow us to maintain all patients who are currently on antiretroviral treatments; they will currently maintain – we will currently maintain those patients on the treatment. In addition, we’ll be able to work toward epidemic control in 12 high-burden countries. So this isn’t reduced – this doesn’t take anybody off the ARTs, but it is making sure we maintain it and then focusing our efforts in the 12 high-burden countries to achieve epidemic control.”

On proposed cuts against organisations that “work against U.S. foreign policy interests” and then the assertion that NATO would continue to be fully funded, a journalist asked what organizations are you referring to? Is that the United Nations? Is it something else?

Responding to this, Doug Pitkin, Director, Bureau of Budget and Planning, U.S. Department of State said tha the account that funds the UN and other organizations covers the UN regular budget and about 40 other organizations, some UN-affiliated, others such as OAS, the World Health Organization, and NATO. And essentially what the budget reflects is two-fold effort. One is a recognition that the U.S. is often the largest single contributor, by far, to many of these organizations. We contribute 22 percent of the UN’s regular budget. We contribute higher rates to organizations such as the OAS and NATO. And I think there’s a recognition that these rates of assessment are often determined by these organizations, despite the fact that the U.S., in many cases, believes that other nations should be paying a larger, more equitable share consistent with either their economic status or the benefits that they accrue from those organizations. So that’s first, is we’re looking for other nations, particularly in the UN, to pay a larger share of those assessed contributions.

Secondly, Pitkin said, there’s also the longstanding effort in many of these organizations to become more effective, more accountable. The US State department, with congressional support, has very strict reporting requirements to report how these organizations are complying with transparency, whistle-blowing, and other basic governance structures that we expect here at home. And many of those organizations have a lot of work to do. And as the President mentioned when he met with UN members a couple weeks ago, he called out the need for greater UN reform to make it more effective. So we’re also looking to these organizations to implement reforms, to lower costs, and deliver greater results.

Click here for US department of State demand FY 2018