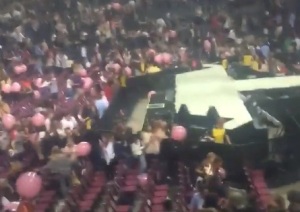 London: One person reportedly has been arrested following a raid on a flat in south London in connection with last night’s suicide bombing at a jam-packed pop concert in Manchester.

There was no confirmation till Tuesday afternoon about the arrest reported by a section of the media on the basis of eyewitness account.

The bombing has killed 22 and injured 59 persons at the Manchester concert venue. The blast came after a performance by the American singer Ariana Grande, who is extremely popular with the new generation.

There were twelve children among the 59 casualties taken to hospital after the attack, according to the Medical Director, North West Ambulance Service

The attack, around 10.30 last night, is being described as the most deadly attack in Britain in a decade. British Prime Minister Theresa May has condemned it by stating its a ‘callous terrorist attack’.

The Prime Minister along with  Amber Rudd, the British home secretary, arrived at the Greater Manchester police HQ in the afternoon to review the sitation.

“A soldier of the Caliphate managed to place explosive devises in the midst of gatherings of the Crusaders in the British City of Manchester,” ISIS news service said.