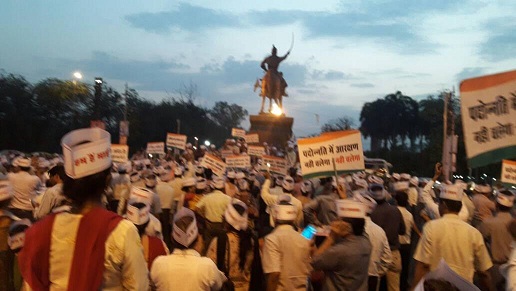 Bhopal: Thousands of Madhya Pradesh Government officers and employees belonging to the general, other backward and minority categories that together constitute about 65 per cent of the entire workforce of the Government, today observed a black day by wearing black ribbons and staging a candle march in the State capital and all other parts of the State to register their protest against the State BJP Government as it had gone in appeal to the Supreme Court on May 10 last year challenging the Jabalpur High Court order of April 30 quashing the State provision for reservation in promotion for SCs and STs.

Today’s protest was on a call given by SAPAKS (Samanya Pichhda Alpsankhyak Adhikari Karmchari Sanstha).

The employees from the unreserved category are suffering as their promotion avenues have been blocked and those from the reserved category who are much junior to them and even have adverse remarks in their confidential reports are getting promoted at a rapid pace in their respective departments. As a consequence, there is deep frustration among the majority of the state employees, job openings for the unreserved categories are getting constricted and as seniority and merit is not the criteria for promotion, administrative efficiency has nose-dived and the quality of governance has become a major issue in Madhya Pradesh.

The unreserved category of employees are caught in a prolonged legal wrangle as the reservation in promotion case is now being heard in the Supreme Court and 10 August 2017 is the next date fixed by the apex court for taking up the matter in this case.