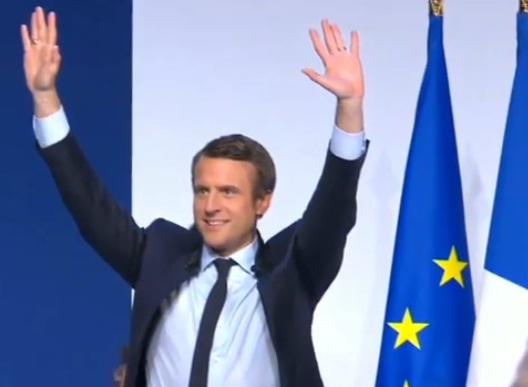 Centrist Emmanuel Macron was elected French president on Sunday. He rode the crest of popular support for his vision of European integration and defeated his far-right nationalisty rival Marine Le Pen who was all for exiting the European Union.

In the euphoria of the anti-fascist win of Emmanuel Macron in the French Presidential élections – I voted for him without enthusiasm only to keep the devil out of the Elysée palace; let it not be forgotten that he does’nt have a structured party base in either house of Parliament which he badly needs to push forward his reforms…..In fact, he does’nt have a governable majority in Parliament….He expects to get a comfortable majority in the legislative élections scheduled for June 2017 with recruits from both the right and left parties….. like the Socialist Party and the rightist Les Républicains. His win was with defectors from the moribund Socialist party and a small boost from the microscopic centrist group headed by François Bayrou and a few the other groups. Trade unions are anxious over his plans to reform labour laws and loosen restrictions on businesses from imposed working hours and laying off obligations. While reform is necessary, it is also essential to maintain social peace….The country needs a sound opposition but from the right and the left leaving out the extrêmes…..particularly the Front National…which we French consider as a non constitutional party. Mélenchon and his supporters from the ex-communist party played a dangerous game by not calling openly to vote for Macron….I’ll not forget this…….When the house is on fire, all hands are needed to douse it and Mélenchon with his stubborn stupid stance contributed to over four million blank votes….further one in four voters stayed away. The fascist nationalist peril is still very much alive…and the Front National hopes to become the primary opposition to the government in the législatures……. THE PRESIDENTIAL ELECTION IS UNFINISHED BUSINESS.

The next necessary step is to keep the Front National from gaining a foothold in the houses of Parliament. Macron wants a strong majority in parliament, his anointed candidates in the upcoming legislative election will have to sign up with his presidential majority group (it is still not a party). None of the traditional parties will accept a double allegiance, and so those who sign up with Macron will automatically be excluded from their parties. The Socialist Party and the Greens need to reform themselves completely and gain the confidence of the people to become parties capable of forming governments. The same goes for the parties on the right of the political spectrum. The splintering of the traditional parties and the emergence of strong fascist nationalist parties are signs of the fragility of our western democracies. While we see prosperity all around us, there remain large pockets of the population which are invisible and marginalized. Growing life expectancy, low natality complicate the replacement of the active work force…… there are no replacements for those who leave the work force because of age or death creating huge déficits for the social welfare schèmes as only the active pay for those who are no longer working. Raising the age of retirement alone will not work, but this highly unpopular measure is still being done in all welfare states. It is paradoxical France needs workers but it is unable to give employment to the unemployed ten percent….

No one, not even Macron (he has to prove his mettle) has the magic answer to today’s woes. The only optimism stems from the signal FRANCE has given to Europe and to the world. On this anniversary of the allied Victory in Europe, it is a hope that the dangers of exacerbated nationalism is kept at bay for a more united and dynamic Europe with a strong Franco-German base.