One terrorist killed in Lucknow after Bhopal-Ujjain train blast 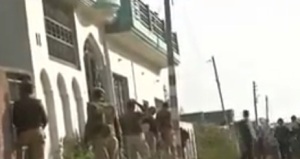 Lucknow: One terrorist was killed early today after 12 hours of fierce gun battle between the anti-terror squad (ATS) and the terrorist, who was holed up in a house in the outskirts of Lucknow.

When the anti-terror operation ended, Uttar Pradesh Additional Director General of Police (Law and Order) Daljit Chaudhary said: “After opening the doors of the house, the force went inside and found the suspect dead along with weapons.”

“At one point of time it appeared that more than one person was holed up inside the house,” he said adding that reports that there were two terrorists holed up in the house was “false”.

Uttar Pradesh IG ATS Aseem Arun has confirmed that the terror suspect killed in the anti-terror operation was an active member of the ISIS. “He belongs to the Khurasan module of the ISIS,” the IG said.

Anti-terror operations in Lucknow followed the Bhopal-Ujjain train blast near Jabdi station in Madhya Pradesh yesterday in which at least 10 people were injured, three of them seriously .