The Economics of Donald Trump : Opportunity for India 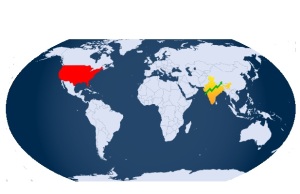 India has a tremendous opportunity with its many drivers of growth and a political will to reform and disinvest will prove to be a plus. Also with its technology upbeat and skilled manpower here and now as in long term many companies such as automakers will like to move from building plants in the US to low-cost countries such as India for vehicle production. The I Phone production facility has many reasons for us to cheer at Bangluru and may foretell a future for a new India in the making.

It appears to the world that the emergence of Donald Trump and the consequent hardening of attitudes across the globe will re-trigger political fault lines that may result in a trade war which may put the U.S. and global economies into recession. It is true a Trump will in future have to contend with the U.S. Constitution in place of the Executive Orders that were hastily issued to keep pace with his radical electoral promises. In contrast the Chinese economy is not at the risk of blowing up as many would make us believe for two reasons: they have a current account surplus and foreign exchange reserves in addition to the state owned banks. In the U.S. as in the rest of the world for almost half a century now it was the capital that outpaced returns instead of the labor. But the backlash is now evident! The question remains, will it help labor intensive economies such as India?

Will the protectionism fever now gripping the globe be the new normal? Perhaps yes! More so as the western world already reeling with the economic meltdown will be impacted, in particular the fundamentals in Europe will continue to be weak and the crisis of confidence will put Europe and the emerging economies to a subsequential path of the U.S. The recent IMF forecast warns that Italy is heading for recession in the next few years. Quite in tandem most developed economies may forgo a rate hike rather than facing the risk of putting their own economies into recession. Perhaps the U.S. with its poor growth and unemployment rates will deter the Federal Reserve from undertaking any rate hikes during the year.

There may be apprehension that relief in sanctions would lead Russia to return to a state of economic stagnation with annual growth slumping back to 1.3 per cent as earlier.

Let us consider the impact on India! Well yes, as it would always happen, countries with high debt to GDP ratio, considering their debt servicing costs, will be severely impacted by a global downturn. Ominous clouds of an emerging trade war due to scuttling of NAFTA and the border tariffs by the U.S. will result in job losses in the entire Atlantic rim.

In such a situation, India has the opportune moment to be the beacon of hope. There is an emerging paradigm of opportunities for India to attract investment with aggressive reformation considering its moderate inflation and present level of interest rates. Formalization of economy consequent to demonetization despite the initial hiccups and the introduction of the GST regime will be thumbs up for India. Globally, with rates below 0.5 percent that may raise only very slowly, our policy mandarins should be focused more on macroeconomic stability as any small shock internationally in the next few years could cause major economic damage. India has a tremendous opportunity with its many drivers of growth and a political will to reform and disinvest will prove to be a plus. Also with its technology upbeat and skilled manpower here and now as in long term many companies such as automakers will like to move from building plants in the US to low-cost countries such as India for vehicle production. The iphone production facility has many reasons for us to cheer at Bengaluru and may foretell a future for a new India in the making.