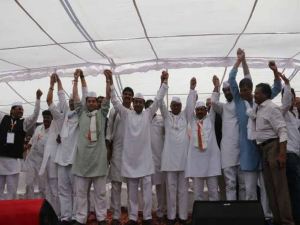 The Congress leaders said that they are united and would see to it that the BJP gets defeated in Madhya Pradesh in the 2018 Assembly election.

The Congress leaders had assembled in the state capital to gherao the State Assembly to register protest against poor governance and the ‘anti-people’ policies of the state BJP government led by Shivraj Singh Chouhan.

The Congress leaders earlier today addressed a big party rally at Tin Shed in T.T. Nagar. They were arrested when they tried to break police cordon and march towards the Assembly. All were subsequently released. 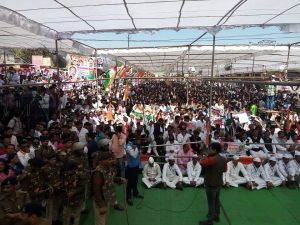 Traffic from the New Market and the Tin Shade in new Bhopal area was diverted and the Police had made elaborate arrangements to prevent the Congress leaders and party activists from marching towards the Assembly.

On the eve of the Congress protest, normal life was disrupted as there was heavy flow of traffic as a large number of Congress workers headed towards the airport to receive the senior party leaders, who later in the night gathered at the party headquarters for dinner.

While Congress leaders described today’s protest as a grand success, those in the BJP said it was a flop show.