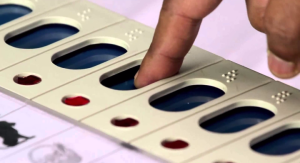 The EC today announced the election schedule for five State Assemblies and also the enforcement of the Model code of conduct for the guidance of political parties and candidates.