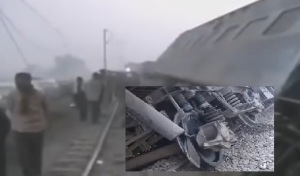 Pukhrayan (Uttar Pradesh): More than 100 passengers were killed and twice as many were injured, when more than two dozen coaches of the Indore-Patna Express derailed in the Kanpur rural district shortly after 0300 hours Sunday morning.

Minister of State for Railways Manoj Sinha told reporters at the accident spot that rail fracture could have led to the ghastly accident.

The maximum casualties were in the S1 and S2 compartments that had telescoped into each. Two more sleeper coaches – S3, S4 – along with an AC III tier coach were also badly damaged.

“Over 150 injured people have been rushed to nearby hospitals in the area. All hospitals have been asked to be alert. More than 30 ambulances have been pressed into service,” IG (Kanpur range) Zaki Ahmad told media-persons.

Prime Minister Narendra Modi, who was addressing today Railway Officers on the 3rd and concluding day of Rail Vikas Shivir (Railways development camp) at Surajkund in Haryana condoled the loss of lives due to the derailing of the Patna-Indore Express. He also announced ex-gratia of Rs. 2 lakhs for the next of kin of those killed, and Rs. 50,000 for those seriously injured, in the rail accident.

President of India Pranab Mukherjee has also condoled the loss of lives in the train accident.

Vice President of India M. Hamid Ansari has expressed grief over loss of lives and said that he is deeply grieved and shocked at the tragic loss of life and injuries to passengers resulting from the derailment of the Indore-Patna Express train.

Union Home Minister Rajnath Singh has expressed deep pain over the loss of lives. He said that his thoughts are with the bereaved families. Singh talked to DG, National Disaster Response Force (NDRF) and instructed him to rush NDRF teams to Pukhrayan.

05 Search and Rescue teams of NDRF have been mobilized. On receipt of information, a search and rescue team of NDRF comprising of 35 responders immediately rushed to the incident site at 0530 hrs from its Regional Response Centre (RRC) in Lucknow. It reached the spot at 0810 hrs and started search and rescue operation at 0815 hrs. Two more teams, comprising of 79 responders, left NDRF Base at Varanasi at 0530 hrs. To strengthen the rescue operation, 2 additional teams, comprising of 75 responders, were airlifted from Hindan Airbase at Ghaziabad at 1001 hrs and these reached the accident site at 1105 hrs. NDRF teams comprise of trained responders, equipped with state-of-the-art Disaster Management equipment and Medical Components.

To supervise the rescue operation, DG NDRF, R. K Pachnanda rushed to the site early in the morning from Delhi.