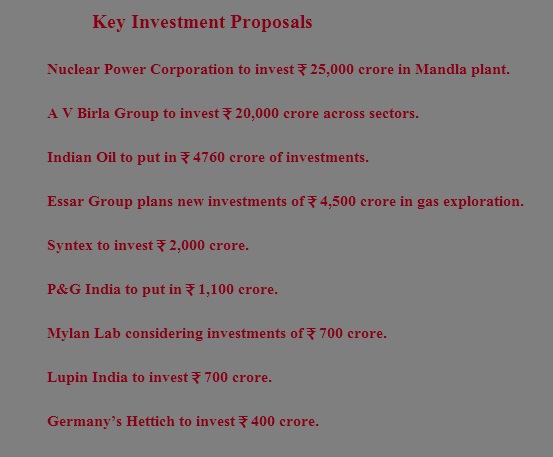 Mr. Naidu was addressing the concluding session of the 2-day Global Investors Meet here today. He said that Madhya Pradesh was earlier called a BIMARU State but this is now a thing of the past. Madhya Pradesh has become a leading state in the last one decade. Availability of 18,900 megawatt electricity in the State is a record, he said adding adequate power is now available to all the sectors. Madhya Pradesh is also leading in the agriculture sector and has become an ideal destination for investment.

On this occasion Union Minister for External Affairs Sushma Swaraj said that as a result of constant efforts Madhya Pradesh has become most favourite state for investment. The Minister said that development has taken place in Madhya Pradesh due to better leadership and public-centric policies. The growth rate of the state is above 10 percent. Programmes like Make in India, Digital India, Clean India, Start Up India, and Smart City have been launched in India to face challenges of 21st century. The world bank has termed Indian economy as the most open economy. International Monetary Fund has termed Indian economy for the year 2016-17 as the fastest developing economy in the world. GST has been passed in 23 states. She said that foreign direct investment worth ₹ 55.5 million dollars has been received in India after the formation of the NDA Government at the Centre led by Prime Minister Narendra Modi

Expressing gratitude towards all the investors, Chief Minister Shivraj Singh Chouhan said that Investors are honourable partners in the development of Madhya Pradesh. He said this summit has become strong platform for business dialogues with the government. Thirty online proposals have been received during the summit and land will be allotted to them shortly. Chouhan informed that 2630 investors have given proposals worth ₹. 56284.7 million during the Indore summit.