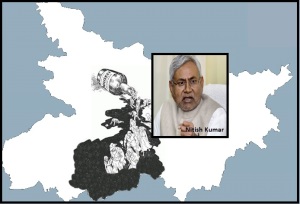 Bihar Chief Minister Nitish Kumar’s refusal to learn from the decision of Patna High Court striking down the notification on prohibition for being ultra vires the Constitution defies political reasoning. By replacing a law with a more draconian notification, he braved out the legal setback to show his commitment to prohibition.

Nitish is much too seasoned a politician to be unaware that there is every likelihood of the notification getting struck down. Question arises: Why did he persist with a notification that bound to be struck down by court? One of the plausible explanation for the Chief Minister veering into the theatre of absurd is his attempt to make prohibition an emotive issue so as to brand himself a champion of a cause dear to women.

Women almost single handedly voted Nitish back to power in Bihar in the last Assembly election. If women can vote for him in a state, why they cannot form a vote bank in another state? This is a flawed presumption but ambition is often blinding. Besides, Nitish has had enough of Bihar and wants to land in Delhi. Modi’s advent to powr at the Centre has shown him the path and Nitish now wants to cultivate a vote bank or a political constituency independent of caste and community across the country to fulfill his political ambition.

Unlike Yadavas, his own castemen- the Kurmis are only 4.3 % of the state population and can’t therefore dictate the state politics. On the other hand, a vote bank of Yadavas (14% of state population) and Muslims has made Lalu Yadav more powerful than a Chief Minister despite a conviction in the fodder scam case and a sullied image in the eyes of the common man. The Rashtriya Janata Dal arm-twisted Nitish Kumar into facilitating the bail of Mohd Shahabuddin, the controversial RJD leader and former MP from Siwan. Ironically, it was Nitish Kumar who had fast-tracked the cases against the Siwan MP during his previous NDA regime when conviction and consequent sentences barred Mohd Shahabuddin from contesting the polls. Aware of changed political equation in the state now, Md Shahabuddin stung Nitish Kumar calling him a leader of circumstances besides refusing to accept him as leader. Nitish Kumar squirmed and tried to get even with him in Supreme Court by challenging his bail. Although the Supreme Court has sent Shahabuddin back to jail, it made extremely caustic remarks against selective amnesia of Nitish Kumar. Patna High Court also struck down the prohibition law. Instead of tempering his approach, Nitish braved it out with a much more draconian law. He may lose the prohibition law in the court but wants to win the war of perception.

Nand Kishore Yadav of Bharatiya Janata Party leader and leader of opposition in Bihar assembly told this columnist over phone, “the prohibition is a bee in his bonnet. I told him during the debate in the state assembly that we support the cause but it is not a law and order problem that you can solve with a law. It is a social evil instead and therefore needs a sustained socio-cultural holistic approach. But that is a long shot. It is also a tough job. In a tearing hurry, Nitish wants an easy way, a short cut. But the court may strike down the law.”

When asked if Nitish is feigning ignorance of the judiciary, the BJP leader said, “he appears to believe that right to legislate is invested with the legislature alone. Once it receives the consent of the Governor, the Bill is a law.” So far so good. Right to drink is not a fundamental right, enshrined in the constitution. At the same time, punishment can’t be disproportionate to a crime committed. Whatever the merit of the case, a chief minister can’t play cat-and-mouse game with the judiciary for long and faces the risk of getting hauled up after a while for contempt of court.

The BJP leader suggested that Nitish Kumar won’t mind being pulled up for contempt of the court. “He may evoke sympathy to play a tragedy hero,” suggested Yadav. But the plot doesn’t seem to be working for Nitish. In desperation, he exaggerated the role of prohibition by giving a Chinese spin a couple of days ago, with the assertion: “prohibition can be the best tool to counter China,”.

Nitish Kumar’s reading of the social scene also is flawed. First, everyone who drinks doesn’t necessarily beat his wife. Besides, the phenomenon is confined mainly to the lower middle class, which means that Nitish Kumar’s purported base will be a limited one.