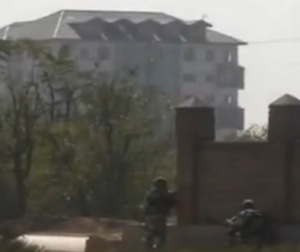 Srinagar: The gunbattle between security forces and terrorists holed up in the Entrepreneurship Development Institute (EDI) building at Pampore on the Srinagar-Jammu National Highway, which lasted about 60 hours, ended today afternoon.

According to an assessment by security personnel, there were two to three militants in the EDI complex. Hence after two terrorists were shot dead, a search operation was launched. This involved the screening of 60 rooms and as many toilets in the building before the anti-terrorist operation, which was also joined by the elite Para commandos of the army, came to an end.

Bodies of two militants have been recovered and the search operation at the EDI building in Pampore has been completed,” said an army official said.

While one militant was killed today, another was killd last evening, While the identity of the terrorists killed in Pampore remains to be established, there are indications that they belonged to Lashkar-e-Toiba.