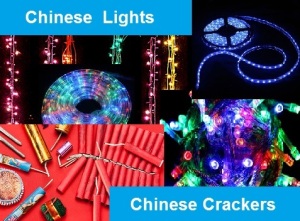 This Diwali, before using the option of lighting up your houses with Chinese decoration lights or bursting cheap and smuggled Chinese crackers, at least remember that by doing this you would be helping a country that has once more blocked India’s move to declare Masood Azhar as an international terrorist. Azhar is the founder of Jaish-e-Mohammed (JeM). This terror outfit, held responsible for the 2001 terrorist attack on Indian Parliament, wants to  separate Kashmir from India and is behind so many terror attacks in Kashmir. China also warned that it will curtail the flow of Brahmaputra when India started talking of reviewing the Indus Waters Treaty signed between India and Pakistan in 1960 at the initiative of World Bank after last month’s terrorist attack on the Army base camp at Uri in Kashmir. China should be taught a lesson on these counts and also because it is going full steam ahead with the China-Pakistan Economic Corridor passing through Pak occupied Kashmir (PoK).

Balance of bilateral trade heavily tilts in favour of China

If the Indian Government succumbs to global pressure or has no choice but to maintain the status quo in terms of tariffs on goods imported from China due to bilateral commitments or the WTO’s new Trade Facilitation Agreement (TFA), which India ratified earlier this year to meet the lofty goal of increasing merchandise exports or further boosting the country’s economic growth by “reducing trade costs and supporting its integration into the global economy” as summed up by WTO Director-General Roberto Azevêdo, the people of India can come forward and play a pro-active role by resorting to en masse boycott of Chinese goods. In this way the people of India will be sending a strong message to China that it should not be blinded by its narrow economic and strategic interests. For the sake of global peace and its own internal security, China would be best advised to wake up and address the issue of global terror in the right perspective. The message should be loud and clear that the people of India, if they wrest the initiative, they have the power to  swing the balance the other way.

Chinese versus the traditional

The China apologists in India may argue that China is among the largest trading partners of India. They will certainly point out that boycott of all Chinese stuff sold off shelves and online besides decoration lights and crackers that get smuggled into India in massive quantities from China , is no solution rather it will hurt the Indian economy and cause a spiralling adverse impact if China decides to squeeze the export of cotton, gems, precious metals, ores, organic chemicals, salt, sulphur, stone, cement, machines, engines, pumps, plastics, raw hides and so on. The pro-China lobby should know that China would be hit harder if India resorts to go into the overdrive mode to revolutionise the domestic production sector, especially Micro, Small & Medium Enterprises (MSME s), coupled with a blanket ban on import of goods from China. Even if the Indian Government drags it’s feet in this matter, the vast majority of Indians should refuse to pick Chinese goods. They should act immediately and turn their back to every Chinese product that would be flooding the Indian market during the current festive season. If that happens, the message would be loud and clear and even the Indian Government will be compelled act and shut its doors to the Chinese finished goods like electronic equipment, machines, engines, pumps, organic chemicals, fertilizers, iron and steel, ships, boats, plastics, medical and technical equipment. This will send shock waves that the Chinese economy will not be able to absorb.